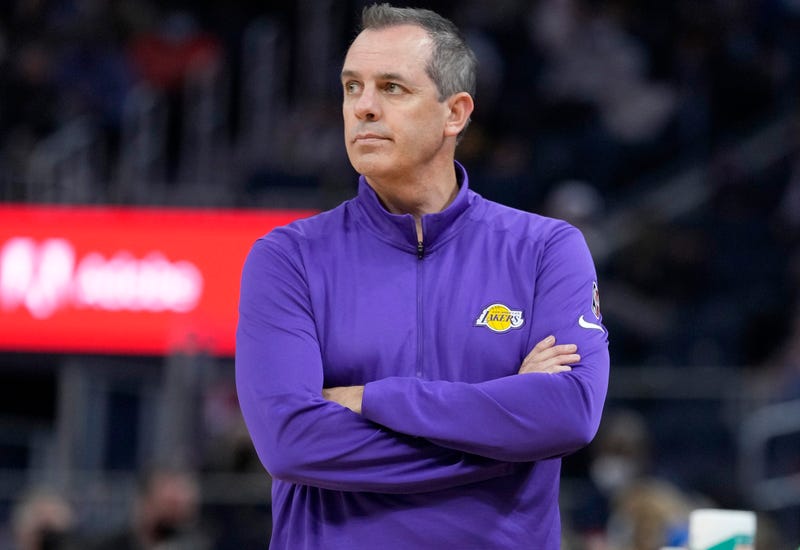 The championship-or-bust Los Angeles Lakers snapped a three-game losing streak on Monday night with a home win over the Utah Jazz, rebounding after a humiliating blowout loss to the Denver Nuggets two days prior. And had the team dropped both contests, it could've cost Frank Vogel his job.

According to a report from The Athletic, the Lakers' third-year coach is being evaluated on a game-to-game basis, and remains at risk of being fired in the near future if his team fails to show further progress. Los Angeles has played 44 games this season, and owns the West's eighth seed with a 22-22 record.

"The biggest problem they've got is the fit of Russell Westbrook and his play. Something LeBron and Davis pushed for," NBC Sports writer Kurt Helin told the Reiter Than You show on Wednesday. "They were very close to that Hield trade. If you do that, you keep KCP, can still sign Caruso, bring in Hield. They bring in more offense, but keep closer to the formula that won the title, which was, LeBron and Davis are elite, surround them with shooters and defenders.

"They've just gotten away from that. They've chased stars, and it's not pretty now... They can't really make roster moves. They're not firing LeBron. Pelinka isn't firing himself, Rambis isn't firing Pelinka. So, it's the coach who takes the blame. He's been the target all along. He's the easy scapegoat. And he hasn't been perfect, but he's going to be the fall guy for things not of his doing."

Although the Lakers have dealt with injuries to key contributors and COVID-19 safety protocol headaches, the level of effort from players has recently been questioned. Vogel is known as an elite defensive mind -- his team ranked first in defensive rating last season and third as 2019 champions -- but at this time, they're no force to be reckoned with. The Lakers rank 18th in defensive rating, and 27th in average points allowed.

Los Angeles will look to build momentum on Wednesday, in a home matchup against Vogel's former team, the Indiana Pacers. According to FiveThirtyEight, the Lakers are currently projected to finish the season with only 37 wins, and their 30-percent chance to reach the playoffs ranks 12th-worst in the league.