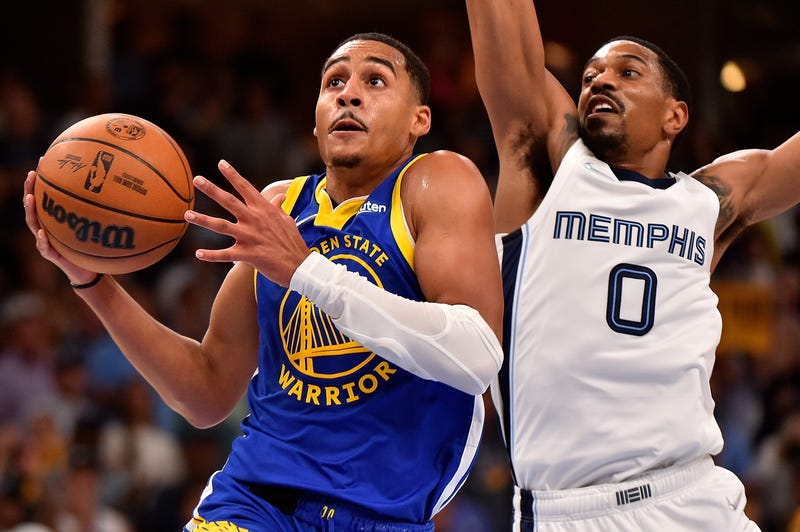 Golden State Warriors third-year guard Jordan Poole didn't receive the NBA's Most Improved Player award for this season. He finished fourth in the voting process, while his Western Conference playoff opponent, Memphis Grizzlies star Ja Morant, earned the accolade by a wide margin. But Poole's efforts on the court have been invaluable to the new-look Warriors, and he's making his presence known under the bright postseason lights.

In seven playoff games this spring, the 22-year-old has averaged 22.3 points, which ranks second-best on the team, along with a team-high 5.9 assists and 18.7 player efficiency rating. In the Warriors' first two games against Memphis, Poole combined to score 51 points, and he nearly recorded a triple-double in their Game 1 win. Golden State's offense still runs through veteran superstar Stephen Curry, but Poole has emerged as a threat with the ball.

"They sent him to the G League last year, and he really went down there with a good attitude. Went down there to work on his game," Warriors color analyst Kelenna Azubuike told The Zach Gelb Show on Friday. "He figured out how to make plays for others and felt what it was like to be the man who has to score and get everyone else involved... So, he came back, was a different person... The guy's the hardest worker on the team, no one's in the gym more...

"He clearly worked on the right things and got better. And his confidence has always been sky-high -- never really been a problem there. He's got so much swag, his college coach said he's got too much swag for his own good. But, now it's serving him well because he's put the work in... He found his groove again, man. He's a dynamic player -- really fun to watch. And it's really cool to see how his work has paid off."

Golden State, which earned the West's third seed with a 53-29 overall record, will play Game 3 against Memphis on Saturday night at Chase Center, with tip-off scheduled for 8:30 p.m. ET. According to FiveThirtyEight projections, the Warriors currently have a 51-percent chance to reach the West Finals and just a 14-percent chance to make their sixth NBA Finals appearance since 2015.

The entire Warriors playoffs conversation between Azubuike and Gelb can be accessed in the audio player above.