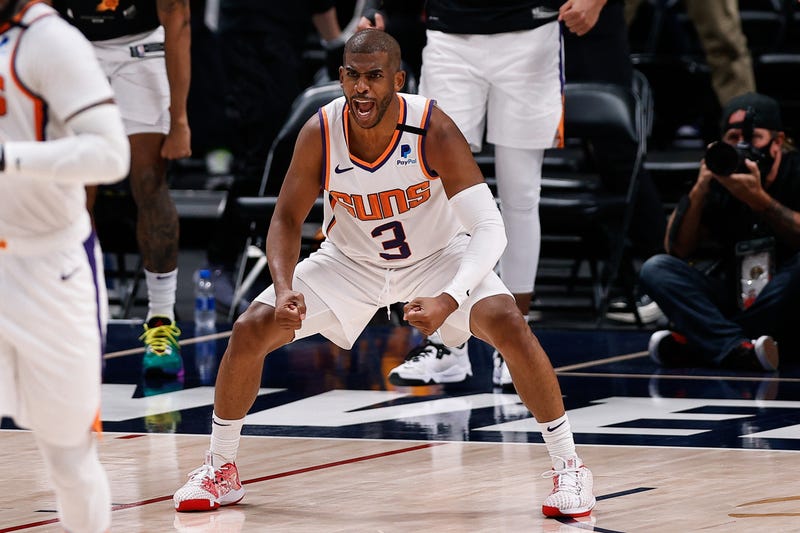 Chris Paul is four wins away from a first-ever NBA Finals appearance.

On Sunday night, the Phoenix Suns completed their second-round sweep of the Denver Nuggets, 125-118, behind a game-high 37 points and seven assists from Paul. According to ESPN Stats & Info, Paul became the oldest player in NBA history (age 36) to average 25 points and 10 assists in a playoff series, and the oldest player to score 35-plus points in a series-clinching game.

Perhaps the Suns have run out of superlatives to describe Paul's impact, both on and off the court. He's revitalized his career through strict diet and lifestyle changes, and rejuvenated a franchise that last appeared in the Finals in 1993. And during Monday's edition of the JR SportBrief show, JR argued that Paul deserves more respect as one of the greatest point guards of all-time.

"You can say that Chris Paul hasn't gotten his full due. You can say that Chris Paul hasn't received the respect that he's owed," JR said. "It's not easy to just go out and ball out at 36. Has his career been LeBron James, has he been jumping out of the gym? Is he a ridiculous freak of an athlete? Is he going to destroy you with his speed and explosion like Russell Westbrook? No, he's not. He's probably one of the last few traditional point guards that you'll see. Chris Paul the shooter -- throughout his career, especially as he's advanced -- he's been underrated as a shooter. The man can score.

"Chris Paul can go out and put up 25 points a night if he wanted to. It doesn't take full advantage of his entire skillset. Someone who can run an offense, someone who can get other players involved, someone who can be a threat. It's pretty damn amazing and it's been rare when you think about a point guard here in 2021, who can score 37 points in a game and not even take one three-pointer. None. He couldn't miss yesterday. He was 14-of-19 from the field. He's taking mid-range shots -- he's swishing them. And you know what? This is nothing new from Chris Paul. This is what he's been doing since he came into the league in 2005..."

According to Stats By STATS, Phoenix is the first team in NBA history with five consecutive double-digit playoff wins after missing the previous postseason. Game 1 of their Western Conference Final series against either the Utah Jazz or Los Angeles Clippers has yet to be scheduled.

JR's complete thoughts on Paul and the Suns can be accessed in the audio player above.