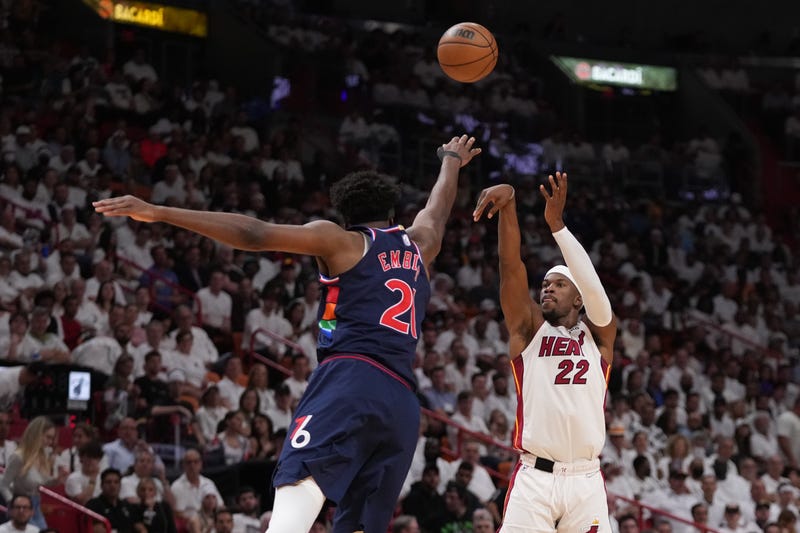 The title-starved Philadelphia 76ers traveled to South Beach with some much-needed momentum heading into Game 5 of their East semifinal series against the Miami Heat. But that energy and confidence never appeared on the court on Wednesday inside FTX Arena, and their hopes of advancing to the Eastern Conference Finals for the first time in two decades are once again in jeopardy.

With tough defensive pressure and a well-balanced offensive attack, the Heat simply flexed their muscles as the conference's top-overall seed, cruising to a 120-85 victory. Miami had seven players record double-digit points, and 76ers superstars Joel Embiid and James Harden were limited to 31 points combined. In NBA playoff history, teams that win the pivotal Game 5 for a 3-2 series lead wind up advancing 82-percent of the time.

"I think the 76ers are going to be a part of the losing percentage. They're not going to be a part of that 18-percent that bounces back. It's just not going to happen," JR said during the JR SportBrief show on Tuesday. "The only player you probably care about in the boxscore is Harden -- 14 points, six rebounds, four assists. That was a mirage, we got last game from Harden... He plays like someone who's beaten down and worn down...

"The 76ers have a chance at home to extend this series. But they look done, there's no championship. It's almost even embarrassing to say that, months ago, I looked at a scenario where I wished we could get the Nets and Sixers in the East playoffs, somehow, somewhere. But I'm glad we're not getting it. Would've been a battle of the bums. Teams worn out have nothing to give... 76ers aren't going to wake up, automatically be able to import new players."

Philadelphia, which clinched the East's fourth seed with a 51-31 overall record, will play a do-or-die Game 6 against Miami on Thursday night (7:00 ET tip-off) at Wells Fargo Center. According to FiveThirtyEight, the Sixers currently have a 27-percent chance to reach the East Finals and just an 8-percent chance to make the NBA Finals for the first time since 2001. They last won a title in 1983.

JR's complete thoughts on the Sixers' dwindling championship hopes can be accessed in the audio player above.