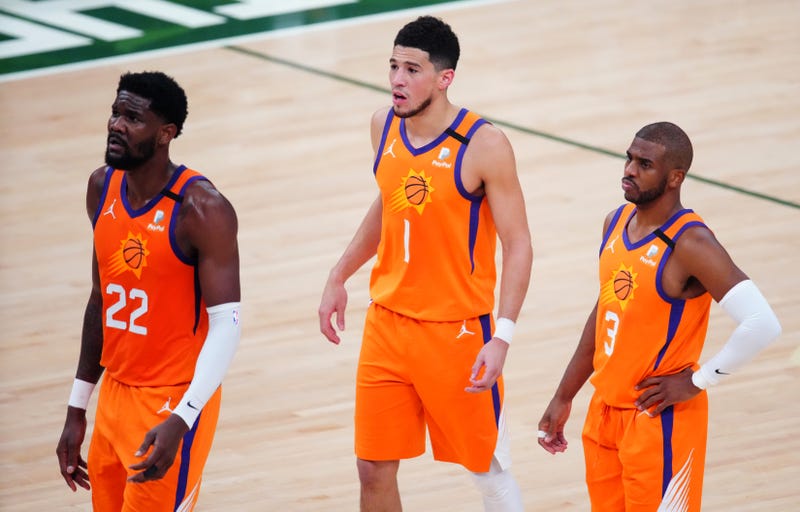 While the Milwaukee Bucks popped champagne in celebration of their first NBA title in five decades on Tuesday night, Phoenix Suns veteran Chris Paul discussed his future with reporters, stating that he has no plans to retire and the situation with his player option for next season will "take care of itself."

The question is, should Paul -- set to embark on his 17th season -- accept his $44.2 million player option with Phoenix for the 2021-22 campaign, or test the free agent market and hope to land a multiyear deal instead?

"If I were Chris Paul, I would stay with the Suns, I would see how they round out their roster," JR said during the JR SportBrief show on Wednesday. "And look, you know it's going to be a fight anyway. Because the Nuggets, Jazz, Lakers -- maybe the Clippers with Kawhi, who knows -- it's going to be a fight, regardless. If I'm Chris Paul, I stay in Phoenix, I try to win a ring, and I try to grow with this young team with any additions that we can put together...

"I think if Chris Paul wants to win a championship... this is difficult. I don't believe there's 'chasing.' He can go to Los Angeles and play with his friend LeBron, or he can stay in Phoenix. I think his best bet would be to stick around with the Suns, and hope that they can develop over these next several seasons..."

Paul, who scored a team-high 26 points on 11-of-19 shooting with five assists in Game 6, became the first player in league history to lose four playoff series in which his team led 2-0. The 36-year-old also averaged 19.2 points and 8.6 assists across 20 playoff games for the Suns, and helped lead the franchise to its first playoff berth since 2010 and first Finals appearance since 1993.

JR's complete thoughts on Paul's future with the Suns can be accessed in the audio player above.