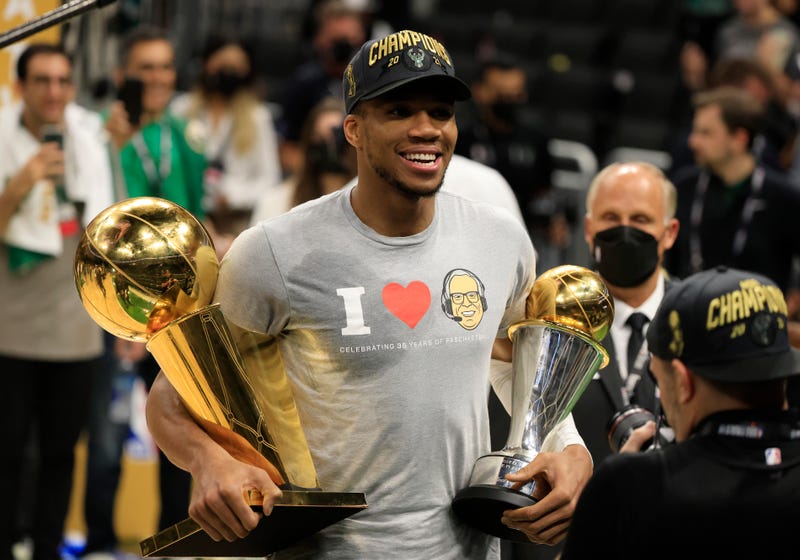 Giannis Antetokounmpo silenced his critics and proved the doubters wrong. Just take a look at the highly coveted hardware in his arms.

Behind a historic 50-point performance from the superstar forward, the Milwaukee Bucks finally reached basketball's pinnacle on Tuesday night, defeating the Phoenix Suns, 105-98, in Game 6 of the 2021 NBA Finals. According to StatMuse, Antetokounmpo became the first player in league history to record 50 points, 10 rebounds, and five blocks in a Finals game. And he accomplished the feat with a hyperextended left knee.

"Giannis Antetokounmpo is a problem. And for all the holes that are in Giannis' game, man, you've got to give him credit," JR said during Tuesday's edition of the JR SportBrief show. "He's unique, he's a Greek Freak. He's going to get all the respect he deserves, and he can still get better... Congrats to Giannis. Hell of a story. Disney owns his story, you will hear and see about it. And now they can put a cap on it as champion... This has been a perfect storm for the Milwaukee Bucks to win a championship.

Antetokounmpo, who was awarded the Finals MVP, averaged a team-high 30.2 points and 12.8 rebounds in 21 games this postseason. According to ESPN Stats & Info, he's the only player in history with an NBA championship, multiple MVP's, a Finals MVP, a Defensive Player of the Year award, five All-Star selections, and five All-NBA selections before his 27th birthday.

Milwaukee, which won its second title in franchise history and first since 1971, is just the fifth team in history to rally from an 0-2 series deficit and win the NBA Finals. As for Suns veteran guard Chris Paul, he lost a league record fourth-career best-of-seven playoff series in which his team led 2-0.

JR's complete thoughts on the Bucks and NBA Finals can be accessed in the audio player above.