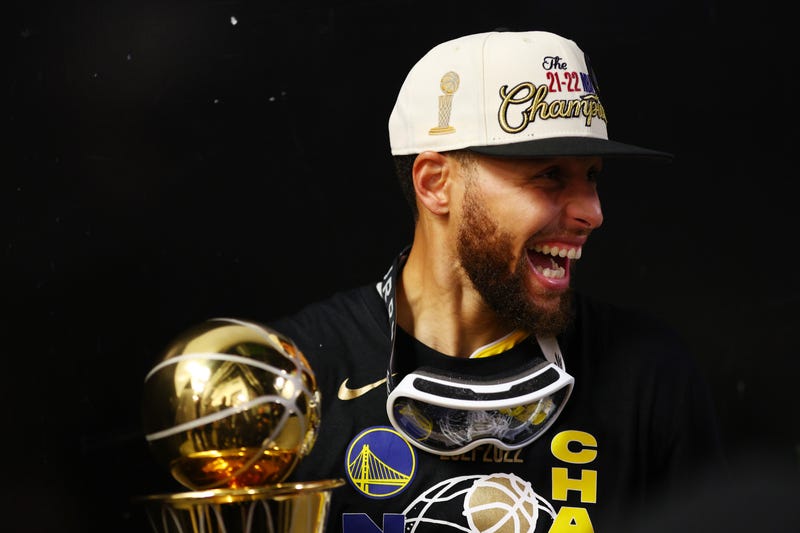 The dynasty isn't over in the Bay Area. Behind a stellar 34-point performance from superstar playmaker Stephen Curry, the new-look Golden State Warriors secured their fourth NBA championship since 2015 on Thursday in TD Garden, beating the Boston Celtics, 103-90, in Game 6 of the NBA Finals. The Warriors now own six titles in franchise history, which is tied with the Chicago Bulls for the second-most all-time.

Curry, who was named the NBA's inaugural West Finals MVP just three weeks ago, received NBA Finals MVP honors for the very first time in his career. The 34-year-old point guard averaged a whopping 31.2 points with 6.0 boards and 5.0 assists in six games against the Celtics. And according to ESPN, he's now the sixth player in league history to have four championships, multiple MVP's, and a Finals MVP. So, where does Curry now rank among the NBA's legends?

"We've got to give Steph Curry some love. He got validation tonight -- picking up an NBA Finals MVP. But, even before the series and victory, he was already one of the greatest," JR said during the JR SportBrief show on Thursday. "And let's all be clear and honest here: Curry just turned 34 years old. Do you think he's done? Do you think he's finished? And do you think these Warriors don't have another chance and opportunity to win another title?...

"You're going to hear, 'Is he top-10, is he top-this?' He is. And he's one of the greatest people you'll ever see pick up a basketball. And greatness comes in many shapes and forms. Steph Curry is a 1 of 1. And I don't give a damn if you think he's Nos. 4-11 -- he's one of the greatest players you'll ever see... You've never seen anyone like him. I'm not God, and I don't have a crystal ball. But I'll be hard-pressed to see anyone play like Steph Curry for the rest of my life."

JR's complete thoughts on the Warriors' championship and Curry's legacy can be accessed in the audio player above.