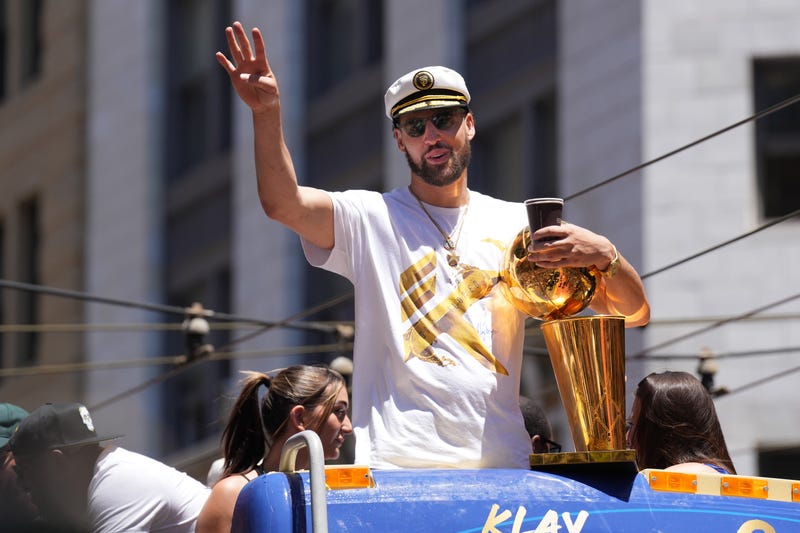 Just four days after hoisting their fourth Larry O'Brien trophy in eight seasons, the new-crowned champion Golden State Warriors spent Monday celebrating with a rally and parade in San Francisco. And based on the videos and photos captured by reporters and fans across the city, perhaps no player enjoyed the festivities more than Klay Thompson. Suffice to say, he was spry and loose.

Thompson lost his championship hat en route to the parade, as it flew off his head while he was on a boat. Later on, he waved to fans while wearing a boat captain's hat and holding the Larry O'Brien trophy. It wasn't the only hiccup to Thompson's day -- he accidentally barreled into a woman after stumbling and tripping on the street. Luckily, the woman was fine, as Thompson apologized and helped her up before he moved on to entertain more crazed fans.

"If there's anybody who deserves to have a good ol' time, it's Klay Thompson. Oh by the way, he wound up dropping one of his championship rings onto the ground. I can't leave it out," JR said during the JR SportBrief show on Monday. "Thompson having the time of his life. This is the same man who blew out his ACL in the 2019 Finals. In recovering, he blew out his Achilles. He came back around the holidays, and the first thing they do is win a championship.

"You've got to know he's not fully recovered, he's not through with the rehab process. And he'll actually have an offseason here, and hopefully get back to normal... You've got to love Klay Thompson, what he's come back from. He doesn't bother anybody. He just plays ball. Seems like a real chill, cool dude. Klay's like the everyman -- I love Thompson... I don't get the bad guy feeling with the Warriors... I think they're easy to root for. I'm with them."

JR's complete thoughts on the Warriors' parade and Thompson's experience can be accessed in the audio player above (begins at 10:00 p.m. ET mark).