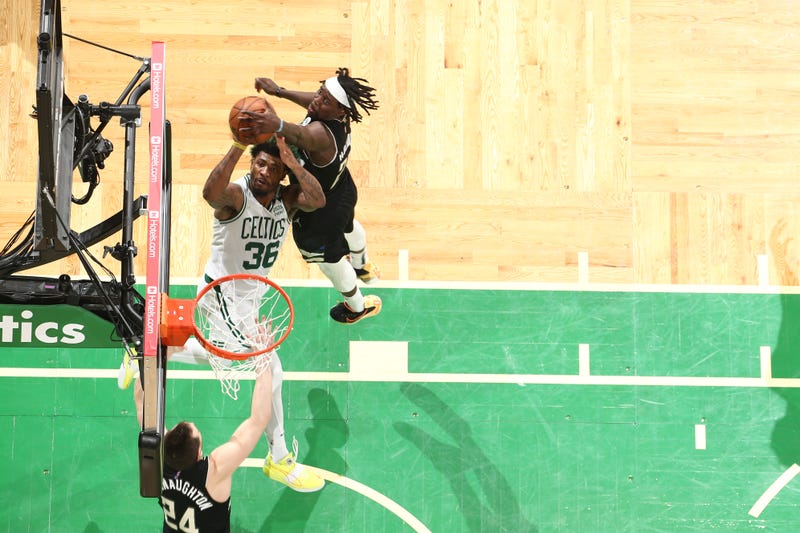 The defending champion Milwaukee Bucks crumbled late on defense against the visiting Boston Celtics in Game 4 of the Eastern Conference semifinals on Monday, as they allowed 43 fourth-quarter points in a disastrous 116-108 loss. Fortunately for the Bucks, they found a way to swap fourth-quarter roles with the Celtics in a pivotal Game 5, just two nights later.

Behind a stellar 40-point performance from superstar Giannis Antetokounmpo and clutch defensive pressure from Jrue Holiday, the Bucks erased a 14-point deficit during the final quarter to outlast the Celtics, 110-107, on Wednesday at TD Garden. Boston's last two possessions came with less than 15 seconds on the clock, and Holiday forced a block and steal while guarding Marcus Smart. The 14 points also tied the Celtics' biggest blown lead in the fourth quarter of a playoff game over the last 25 postseasons, according to ESPN Stats & Info.

"I picked the Bucks to win the series in about six or seven games, and it looks pretty true and accurate now. But, the Celtics looked like they were just going to crush Milwaukee's hopes and dreams," JR said during Wednesday's edition of the JR SportBrief show. "And Jrue Holiday looked like he was sleepwalking for the majority of this game, and he winds up with the two big plays to drive the knife into the heart of Celtics fans... You can throw all of that momentum out the window.

"It's gone. There's no momentum for the Celtics. All of the momentum is back on the Bucks. They've got to play again in two nights, and I think they should just finish this off... Boston might as well get ready for next season... This is a Celtics team that might put the clamps on you, but when it's time to get some buckets, it's still the same old story that Smart talked about, earlier this year... The Bucks proved why they're the defending champions."

Milwaukee, which clinched the East's third seed with a 51-31 record, will play Game 6 against Boston on Friday at Fiserv Forum (tip-off TBD). According to FiveThirtyEight projections, the Bucks currently have a 69-percent chance to make the Eastern Conference Finals and a 38-percent chance to return to the NBA Finals. In league playoff history, teams that claim Game 5 and take a 3-2 series lead wind up advancing 82-percent of the time.

JR's complete thoughts on the Bucks-Celtics series can be accessed in the audio player above.