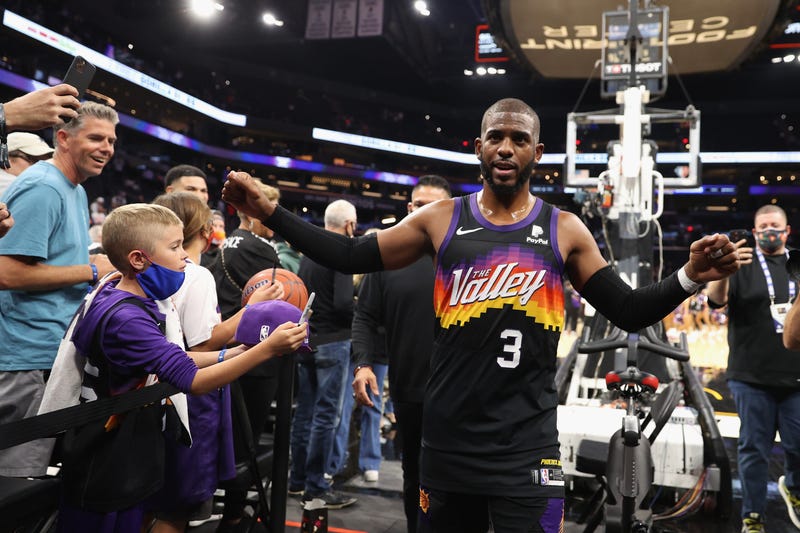 Back on Oct. 27, the reigning Western Conference champion Phoenix Suns fell at home to the inferior Sacramento Kings, dropping to an underwhelming 1-3 on the young season. Since then, the team hasn't lost a single game.

Three years after enduring a miserable 17-game losing skid, the Suns are now in the midst of a remarkable 17-game win streak, as they outlasted the feared Golden State Warriors on Tuesday night at Footprint Center, improving to 18-3. And naturally, Phoenix's run has been managed by veteran guard Chris Paul, who leads the team in average assists and ranks third in points per game.

"The start they're on now is ridiculous. It's basically the same squad," JR said during Wednesday's edition of the JR SportBrief show. "The Suns, right now, back at the top, you can say they're the best team in the NBA. And if you look in the West, who's their biggest challenge? Is it the Lakers? Warriors? Jazz? Nuggets? C'mon, none of these teams are messing with them..."

According to Elias, Phoenix's matchup with Golden State was the first time in history that two teams from the same division played each other with winning percentages of .850 or higher after at least 20 regular season games. In the Suns' road win over the Brooklyn Nets last Saturday, Paul added a brand-new page to the league's record book, becoming the first player to record 20,000 career points and 10,000 assists.

Phoenix will look to extend its streak to 18 wins on Thursday night, in a home matchup against the lowly Detroit Pistons (4-17). According to FiveThirtyEight, the Suns currently have a 30-percent chance to defend their conference title and a 16-percent chance (best in West) to win their first NBA championship.

JR's complete thoughts on the Western Conference playoff picture can be accessed in the audio player above.