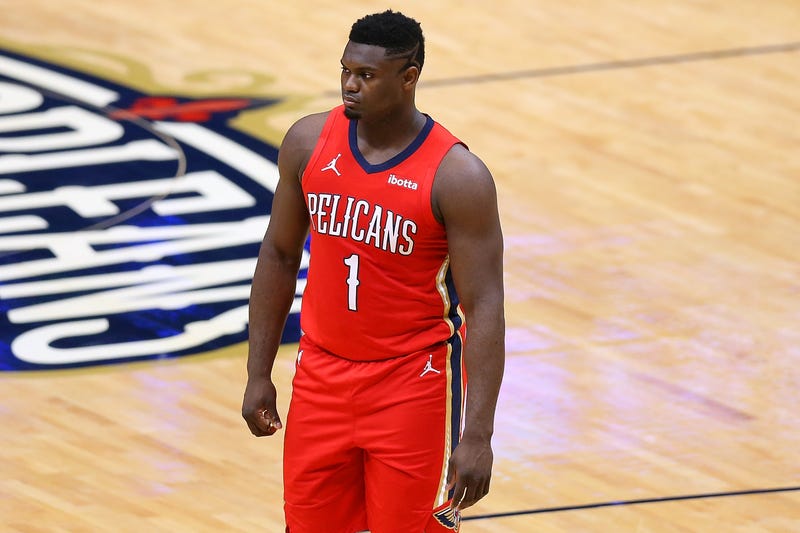 Just hours before the New Orleans Pelicans lost their regular season opener to the Philadelphia 76ers on Wednesday night, a report from Jake Fischer of Bleacher Report said that Zion Williamson "reached north of 300 pounds" while recovering from offseason foot surgery.

If true, consider this disconcerting news for the Pelicans, as Williams recently suffered a two-week-plus setback that's forcing him to miss games. And with this latest rumor, plus his established injury history at the age of 21, his future with New Orleans has become even murkier.

"He's been injury prone. There's all sorts of questions now about when he told the Pelicans about the foot thing," NBC Sports writer Kurt Helin told the Reiter Than You show on Thursday. "Did they know when it happened, or was this something that, he went and got the surgery and kind of sprung it on them later? There's all sorts of questions around the league about how that worked out. He's so good when he plays.

"But the motivation, the drive to stay in shape, the things he's going to have to do to reach that elite level... There's a whole lot of teams looking at him, wondering if he's going to stick around there. 'I wonder if he gets unhappy and tries to force his way out.' Teams are talking about that, but it's like, 'Can we motivate him, drive him to be better? Whatever is keeping him from doing the things he needs to do in New Orleans, how do we get him to do them?'"

Last Thursday, Pelicans vice president of basketball operations David Griffin told reporters that Williamson has "no fixed timeline" for a return to the court, and he'll be reevaluated in two weeks. The former first overall pick fractured his right foot in early August, during an offseason workout ahead of summer league play.

Williamson is no stranger to missing time. Although he averaged a team-high 27 points with 7.2 rebounds in 61 games last season, he played only 24 games during his rookie campaign in 2019 after tearing his right meniscus in October training camp. Last year, Williamson's season ended early due to a fractured left ring finger, which cost him six games. The Pelicans finished two wins shy of being the 10th seed in the league's brand new play-in tournament.

New Orleans will play its next game on the road against the Chicago Bulls on Friday night. According to FiveThirtyEight's projections, the Pelicans have a 74-percent chance to reach the Western Conference playoffs this season.