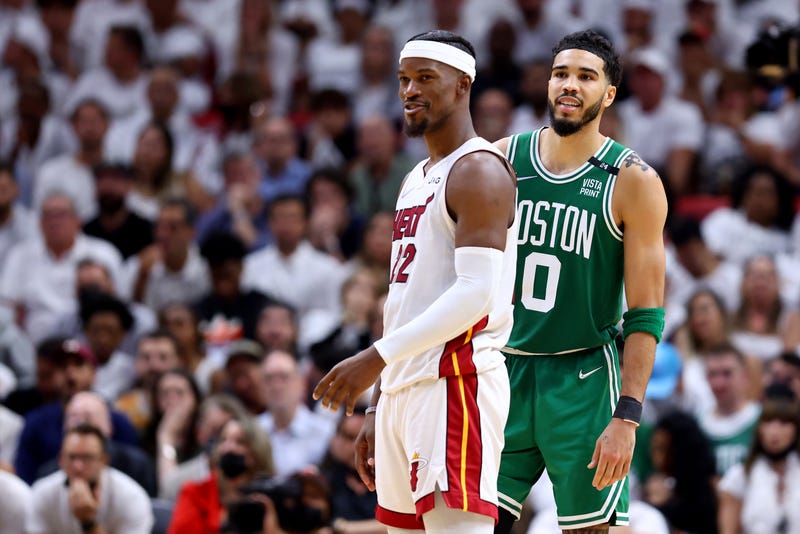 Just hours before the Boston Celtics started their Eastern Conference Finals series against the Miami Heat on Tuesday at FTX Arena, the team announced that two-fifths of their lineup wasn't going to suit up. Marcus Smart, who was recently named Defensive Player of the Year, suffered a midfoot sprain during Game 7 of the East semifinals on Sunday, and veteran Al Horford surprisingly entered the league's COVID-19 health and safety protocols.

Consequently, the shorthanded Celtics weren't able to fend off the Heat for all 48 minutes. Behind a stellar 41-point performance from veteran swingman Jimmy Butler and second-half offensive surge, Miami defended home court, claiming Game 1 with a 118-107 victory. Boston was outmuscled in a lopsided third quarter, and first-year coach Ime Udoka admitted to reporters they were "out-toughed." The Celtics controlled the first half with ease, but it didn't last.

"Game 1 was set up for Miami to win it, and they did a good job. And they took advantage of it with homecourt," former Celtics executive and current Audacy NBA insider Ryan McDonough told the Reiter Than You show on Wednesday. "Butler had a historically good performance. And that's one thing not getting enough attention, nationally. We focus on Giannis, Luka, and Jayson Tatum --they're terrific players. No one's played better than Butler in this postseason.

"There are clear paths for the Celtics to get better. I think Boston will win the series if Horford comes back relatively soon. He's a very important player for them. If they get Horford, Smart back, and get rested. Just had a hard-fought series against the defending champion... Last night was set up for Miami. But part of that was the Celtics running out of gas -- just given what they've been through over the last couple weeks... I expect the Celtics to bounce back."

Celtics star duo Jayson Tatum and Jaylen Brown scored 53 combined points in Game 1, but their production was overlooked by their third-quarter swoon. Boston scored only 14 points and shot 13-percent from the floor, their worst field-goal percentage in any quarter over the last four years. It also took the team seven-plus minutes to connect on its first bucket, and they committed eight turnovers -- as many as it had in the other three quarters combined.

Boston, which clinched the East's second seed with a 51-31 record, will play Game 2 against Miami on Thursday night (8:30 p.m. ET tipoff). According to FiveThirtyEight's projections, the Celtics have a 61-percent chance to reach the NBA Finals and a 51-percent chance to win their first championship since 2008. Both teams met in the 2020 East Finals, and Miami won in six games.

The entire NBA playoffs conversation between McDonough and Reiter can be accessed in the audio player above.