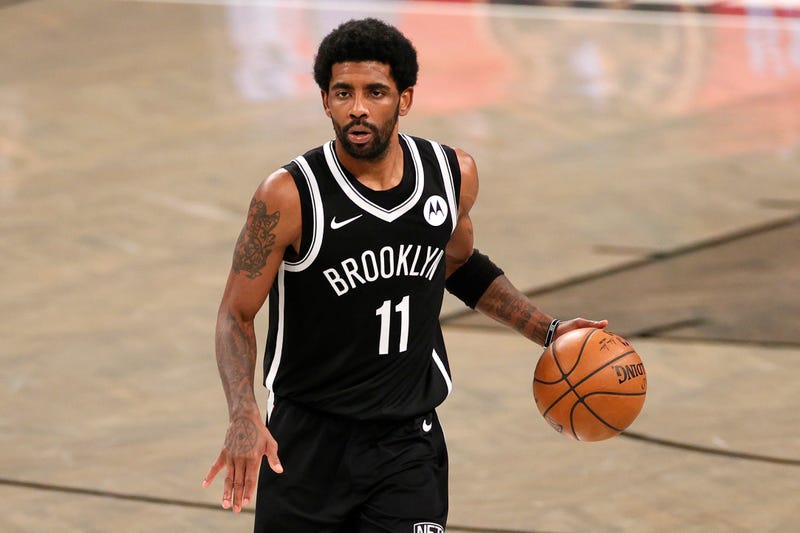 The Brooklyn Nets are willing and prepared to play the entire regular season without one of their Big Three superstars.

On Tuesday, Nets general manager Sean Marks told reporters that Kyrie Irving won't play or practice with the team until he gets vaccinated against COVID-19 and complies with New York City's vaccine mandate. Brooklyn also released a statement about Irving, saying that they won't allow any players to participate with part-time availability.

"Kyrie Irving was the guy who very instrumental in getting Kevin Durant here, and then it was a trickle-down effect to James Harden," NBA.com reporter Mark Medina told the Reiter Than You show on Wednesday. "I don't think it's going to reach that point, even with Irving going rogue, the idea of missing out on helping a championship team and missing out on paychecks. Even for his standards, that's a lot. But he's already created enough damage as it is.

"He's burned a hell of a lot of equity over something, frankly, that's just stupid. The vaccine has been proven to be safe and effective... It's also horrific from a leadership standpoint. This all comes down to being accountable for your team, teammates. And even if the Nets, during all of camp, either downplayed it or stepped around it or ignored it, I can't help but think that, internally, they had these 'WTF' thought bubbles..."

According to a recent report from The Athletic's Shams Charania, which cites multiple sources, Irving doesn't hold an anti-vaccine stance, but rather wants to be "a voice for the voiceless." Ironically, when Irving was asked about his vaccination status during Nets media day on Sept. 27, he requested privacy on the matter. If Irving remains unvaccinated, he'd lose roughly $380,000 for each home game missed, as per an agreement between the NBA and players union.

Although the NBA isn't mandating players to get vaccinations, New York and San Francisco are two cities that have vaccine mandates. Back in August, New York City mayor Bill de Blasio issued an executive order that requires New York-resident athletes who practice or play indoors to show proof of at least one vaccine shot.

The entire NBA conversation between Medina and Reiter can be accessed in the audio player above.