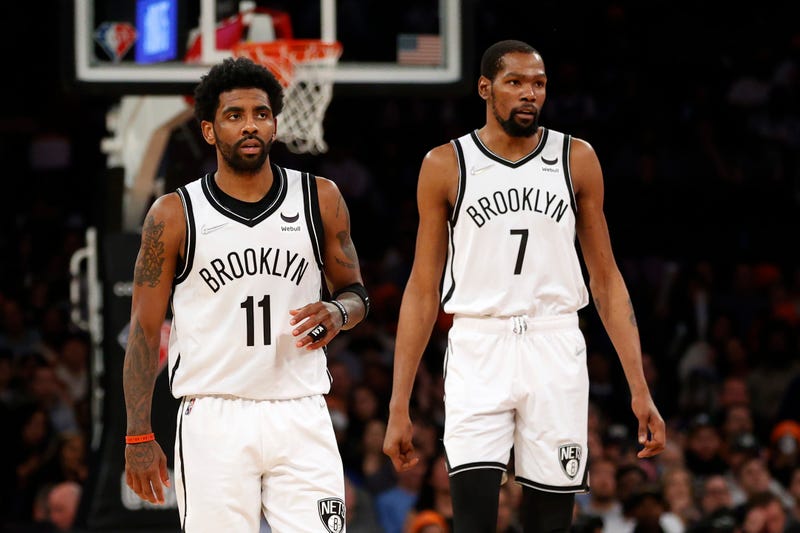 Brooklyn Nets superstars Kevin Durant and Kyrie Irving have played 44 games together since joining the franchise in 2019, and they might not take the floor for another one. According to NBA insider Shams Charania, Irving's long-term future with the Nets is seemingly in doubt, as the both sides have reached an "impasse" in regard to contract discussions. It's the latest chapter to the Nets' best-selling drama.

Last month, the NY Daily News reported that Brooklyn was "outright unwilling" to offer Irving a contract extension this summer, due to his vaccination status and unreliability as a recent part-time player. Due to New York City's COVID-19 vaccine mandate, the 30-year-old guard didn't make his regular season debut until Jan. 5, and in 29 games, he averaged 27.4 points with 5.8 assists and 4.4 boards. Brooklyn has Durant under contract through the 2025-26 season, but Irving can soon decline a player option for next season and test free agency.

"It primarily starts with, how much money do you want to invest in a guy who hasn't shown that he's able to play, but willing to play," Action Network writer Matt Moore explained to After Hours with Amy Lawrence on Tuesday. "That's been the real problem with Irving over the last couple of years... And the big question here is, what does Durant want? Because if KD comes in and says, 'You either re-sign Kyrie or I'm out,' the odds are that Kyrie will get re-signed.

"But, if KD is at a point where he's like, 'I don't know if that guy's going to be there for me, let's see what else we can do,' there are options... And this is a long-going rumor, that Kyrie and LeBron have been interested in a reunion of some form for months... Again, I think the real question comes down to what KD wants. 'If Kyrie's not going to be part of this, I want out,' that changes the equation. I think he's going to have a massive say in how they navigate this."

The entire NBA conversation between Moore and Lawrence can be accessed in the audio player above.