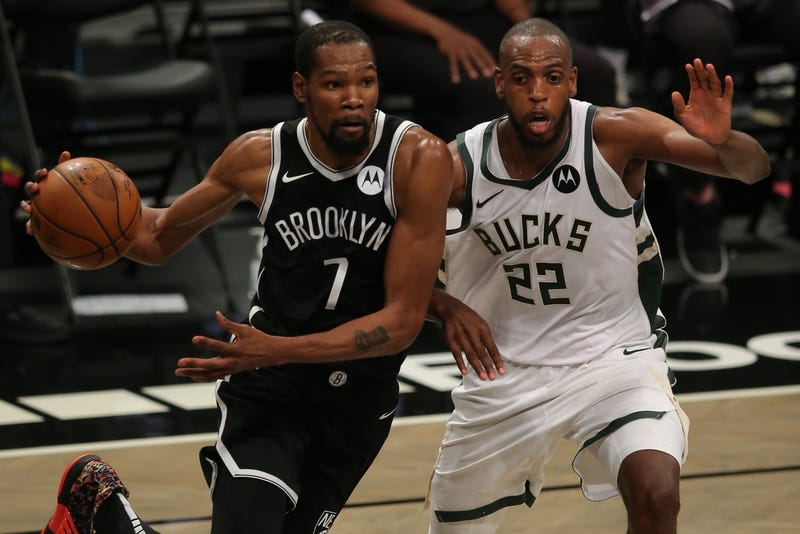 The Brooklyn Nets will most likely play without two superstars in a pivotal second-round Game 5 against the Milwaukee Bucks on Tuesday night, as Kyrie Irving (ankle sprain) has been ruled out and James Harden (hamstring strain) is currently listed as questionable.

Perhaps the Nets can take solace in the fact that Game 5, which will be played at home, isn't an elimination game. But if Irving and Harden are unable to return to the floor this week, don't count on lone star Kevin Durant carrying the team past the Bucks, according to former NBA guard Chris Childs.

"These guys are elite players. I don't think Kevin Durant can do it by himself, can beat Milwaukee by himself," Childs told The DA Show on Tuesday. "He's a great player, but I don't think he can do that. And I'm pretty sure that if these guys can go, they'll go. I know their team depends on them. They're two different dynamic type of players. It takes a lot of pressure off of KD, because now he has to be initiating everything.

"He has to get everybody shots, get them open -- something that he's not comfortable doing, because with James and Kyrie out there, he can just be a scorer. But now he has to do all the other things. So, hopefully these guys can come back and give themselves an opportunity. Because without those two, I don't think the Nets can beat the Bucks."

Durant, who leads the Nets in points per game (31.3), rebounds (8.2), and blocks (1.8) this postseason, didn't struggle in the five regular season games that he played without both Irving and Harden. The 32-year-old averaged nearly 34 points and shot 63-percent from the floor, per ESPN Stats & Info.

Game 5 of the best-of-seven series is scheduled to tip-off at 8:30 p.m. ET. According to FiveThirtyEight's projections, Brooklyn has a 60-percent chance of advancing to the East Finals for the first time since 2003.

The entire NBA conversation between Childs and DA can be accessed in the audio player above.