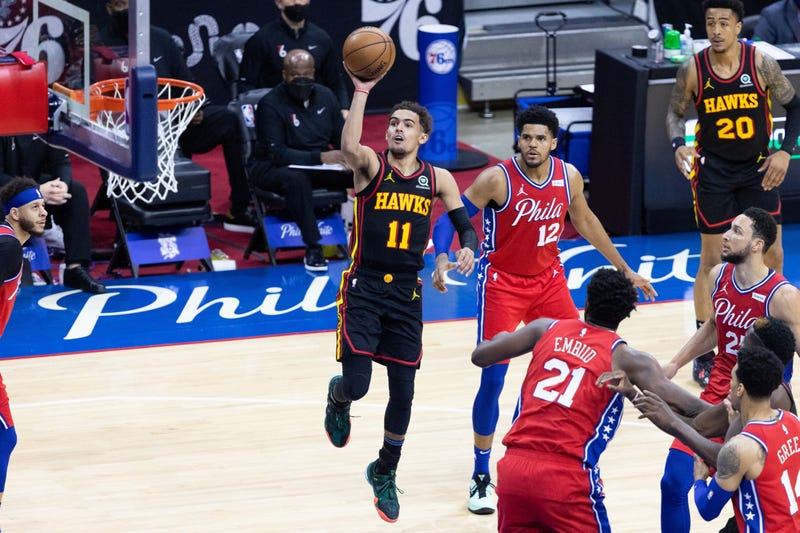 Philadelphia 76ers star center Joel Embiid had a masterful performance in the team's Game 1 loss to the Atlanta Hawks in the East semifinals on Sunday. He scored 39 points on 57-percent shooting, while collecting nine rebounds. The last time Embiid scored 39 points on over 57-percent from the field was in the month of February. People can speculate all they want about how severe his knee injury is, but it certainly didn’t limit him yesterday, because he looked like one of the best players in the world and the typical Joel Embiid. The Sixers, the No. 1 seed in the East, shot 55-percent from the field and got to the line 35 times. Yet, they still lost. How? Because of Rayford Trae Young.

Young is doing this without a single All-Star on his team, without a single player who's won an NBA title. Sixers forward Danny Green has won three titles with three different teams, for crying out loud. Had Embiid’s season not been marred by injuries, he would likely be the regular season MVP. Yet, it's the “no one believes in us” Hawks that are up 1-0 against the Sixers. Forget the team-high 35 points for Young -- he had 10 assists while the rest of the Hawks starters combined for seven. As great as Dallas Mavericks star Luka Doncic is, the Young-Doncic argument is also beginning to happen for the first time in their young NBA careers.

We laud Doncic for his greatness and his MVP future that will happen sooner rather than later. We marvel at his basketball IQ, decision making, and overall game that's well beyond his three years in the NBA. Yet, in this postseason, it’s Young who's been a lot more careful with the basketball. He’s averaging three assists for every turnover, while Doncic is averaging two. I realize that Doncic is going to grab a lot more boards, but who do you trust more with the ball at the end of the game? I’m choosing Young, the player who can make 94-percent of his free throws, as opposed to Doncic, who makes less than 53-percent. This isn't meant to be a critical piece on Doncic -- he's fantastic and well on his way to a Hall of Fame career. But Young is very much sitting at the same table. He also happens to own a 1-0 playoff series record, while Doncic sits at 0-2.

To put Young's recent greatness into perspective, he became just the fifth player in a conference semifinal game to put up at least 35 points and 10 assists in a road win. In the last 35 years, there are only three others who can make that claim: Michael Jordan, LeBron James, and Steve Nash. All three of these players are multiple regular season MVP winners. Young wasn’t even an All-Star this season. Two of these individuals have combined to win 10 NBA Finals MVP trophies. The next youngest player to ever score 35 points with 10 dimes in a road conference semifinal game was Steph Curry, at 25 years old.

The Sixers had all the momentum in the world coming into Game 1. They were playing in front of their biggest crowd of the season, with 18,624 fans in attendance. Embiid just happened to walk out with WWE legend Triple H, to a thunderous ovation. How did the young Hawks respond? They went on a 17-0 first-half run. Atlanta is now 5-1 in the postseason, and as a result, they lead their second-round series. Jordan, the GOAT himself, never made it to a second-round series in his first three postseason runs. Young is already there, in his first postseason. Quite the playoff legacy so far for Young -- pun intended.

It’s rare that a rookie, at just 22 years old, wins a playoff series as the team's best player. It’s even more rare to go into a No. 1 seed's building -- where they are virtually unbeatable -- and take a Game 1 while being the best player on the floor. Young might be the best player in this postseason, overall, and considering what he's doing -- and who he's doing it with -- it’s hard to argue against the point. Aside from Young and the Hawks fanbase, nobody could've expected this as recently as a couple of months ago. What's even more remarkable is the fact that Young could've been a senior in college this season. Young is well beyond college at this point. In fact, he’s the one doing all the teaching in the playoffs so far. Just ask the New York Knicks and Sixers.