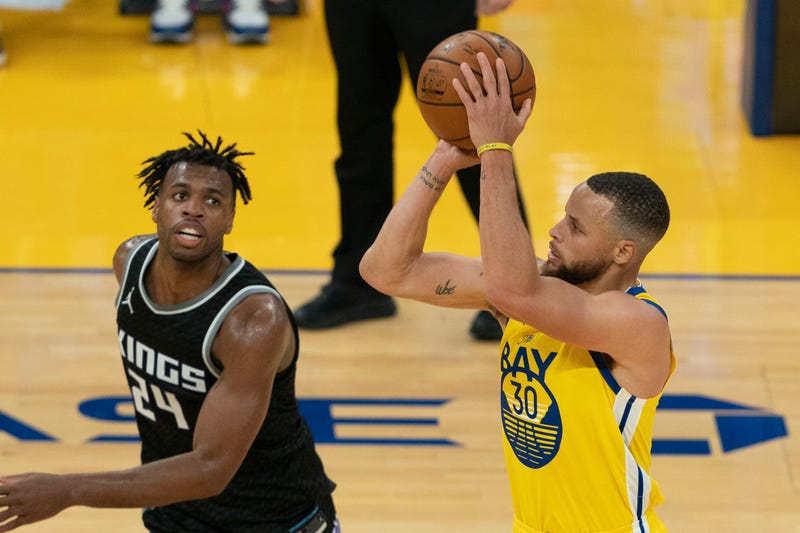 In the history of the NBA, only two league MVPs have played on teams that finished with losing records. Is it possible Stephen Curry could become the third?

The Golden State Warriors' superstar guard has certainly made his case over the past few weeks, as he's been shooting the ball with exceptional accuracy and confidence from deep ranges. On Sunday night in San Francisco, Curry hit seven three-pointers en route to a 117-113 win over the Sacramento Kings, and set a new NBA record for most threes made in a calendar month (85). In 12 of 13 games this April, he's scored at least 32 points, and throughout the month, he's shot 52.9-percent from the field and 47.2-percent from beyond the arc.

Even by his standards, Curry's recent stretch of performances can be deemed jaw-dropping. Not only has his unconscious streak of shooting sparked debate on where he ranks in the MVP conversation, but he's also carried the Warriors (31-30) to seven wins in the last nine games, and given the team some breathing room as the No. 10 seed in the Western Conference playoff picture.

"The shots that [Curry] hits from beyond three-point range, off the dribble, the degree of difficulty is crazy, defenders draped all over him," former NBA player and current Warriors television analyst Kelenna Azubuike told After Hours with Amy Lawrence on Monday. "And you see him hit the shot, and the defenders just turn around and their hands just plop down like, 'What are we supposed to do? We did everything we possibly could, and the guy is still making these shots. It's super frustrating and demoralizing.' And he's doing that to grown men in the NBA, the best defenders in the world -- fast, quick defenders -- and just making them look ridiculous.

"And he does it with a smile on his face, and he's celebrating and he's running around, like a little kid just having fun. He plays with so much joy. It's just amazing. And it never ceases to amaze me -- the way he does it, the audacity that he has, the boldness, the supreme confidence. He spends so much time in the gym working on everything and then he gets out there and he just lets his mind be free. And he's just a wild man..."

The entire NBA conversation between Azubuike and Lawrence can be accessed in the audio player above.

music
Adam Sandler reunites with IHOP employee for ‘Milkshake Monday’
music
Billie Eilish has seen your comments on her 'Vogue' photos, and it makes her wanna post less
music
The Weeknd and The Cop from The Village People is the feud we didn't see coming
music
Joshua Bassett confessed Harry Styles is 'hot' and everyone thinks it's a plot twist
music
Blake Shelton admits this might be the first superstar in 10 years of 'The Voice'
sports
Jonathan Jones: Tebow has '50/50' chance of making Jaguars
<svg width="308" he