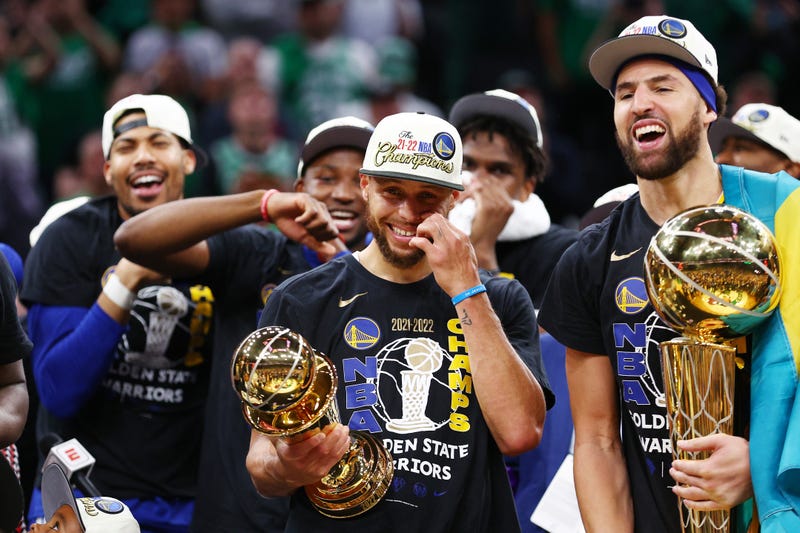 The saying of "all good things come to an end" is widely applicable to sports dynasties, but, sometimes, all that a franchise needs to do is make a couple adjustments to continue its stretch of success. And the newly-crowned NBA champion Golden State Warriors have the opportunity to reset expectations for pro sports teams, with their new-look "Splash Brothers" reunion tour.

What's going on with the Warriors is strikingly similar to when a popular band breaks up, gets rid of a few members, and then decides to get back together. Golden State's version of a breakup wasn't voluntary, but it allowed the front office to reconfigure and build the roster back up, behind its stars. Perhaps they would've captured the NBA title without Jordan Poole, Kevon Looney, and Gary Payton II, but they provided a seemingly necessary boost.

At 34 years old, Warriors superstar playmaker Stephen Curry is hardly slowing down. His 27.3 points per game in the postseason was the second-best mark of his career, and having veteran sharpshooter Klay Thompson back alleviated much of the pressure. Judging by the naked eye, the 2021-22 Warriors played looser, calmer, and more poised, than any other team of theirs in recent years.

During the stretch from 2014-2018, when Golden State won three NBA Finals in four seasons, they earned the top spot in the Western Conference in each year, winning more than 65 games in two of them. Maybe this Warriors squad wasn't as dominant, as they had to settle for a No. 2 seed (gasps). But, at the same time, the Larry O'Brien trophy doesn't come with scratch marks for title-winning teams that didn't lock down the No. 1 seed.

Warriors head coach Steve Kerr understood the marathon nature of an NBA season, and did a perfect job preparing his players to get through the highs and lows. Despite the Phoenix Suns' talent, and the flashiness of Memphis Grizzlies sensation Ja Morant, the Warriors coasted below the radar, flexing their when it mattered most. The Boston Celtics were a tough team to match on a Finals floor for 48 minutes. But, Golden State turned out to be equally as tough, and more explosive.

Second waves of sports dynasties are few and far between. In Major League Baseball, the Boston Red Sox celebrated the World Series in 2013 and 2018, after winning it twice in a four-year stretch. Those titles were probably too far apart from one another to be considered a first and second dynasty. Plus, the identity, complexion, and makeup of those two teams were very different. Top players Manny Ramirez, Jason Varitek, and Tim Wakefield had long departed by the time Boston won their two most recent championships.

Kobe Bryant was with the Los Angeles Lakers when they won three straight Finals with Shaquille O'Neal, and then struck gold in back-to-back years with Pau Gasol later on in his career. But Bryant's just one player, and that Lakers team went seven seasons between championships. While there's similarities to the aforementioned Lakers and Red Sox teams, Golden State's situation is much more unique.

The Warriors have only gone two years between titles, and their main core of players remains the same. Draymond Green and Thompson are both 32, and there's reason to believe that they have a few solid seasons left in their legs. It'll be difficult to justify calling their second-phase boyband a dynasty if they don't win another title. Dynasties need multiple trophies to quantify success.

But this team team has the tools to win at least two more titles. They have the perfect mix of veterans and early-career guys, a premier head coach, and the model team chemistry to reach their ceiling. They're also more likable, having not gone out and signed a Kevin Durant as the final piece to their superteam.

The reunion tours for once-popular music groups can get ugly with the egos and characters involved. None of Curry, Thompson, and Green have the type of disruptive personality that'll interrupt the locker room and younger players' development. Rarely do highly-paid superstars set personal agendas aside at the door. This is the exception, however, as a strong locker room culture has everyone focused on the task at hand.

While the definition of a dynasty is subjective, as currently constructed, the Golden State has the chance to experience a continuous era of dominance, defined by different phases. The revolutionary concept could change how front offices across pro sports approach team building -- or, it could be the latest example of organizational dominance that simply isn't replicable.