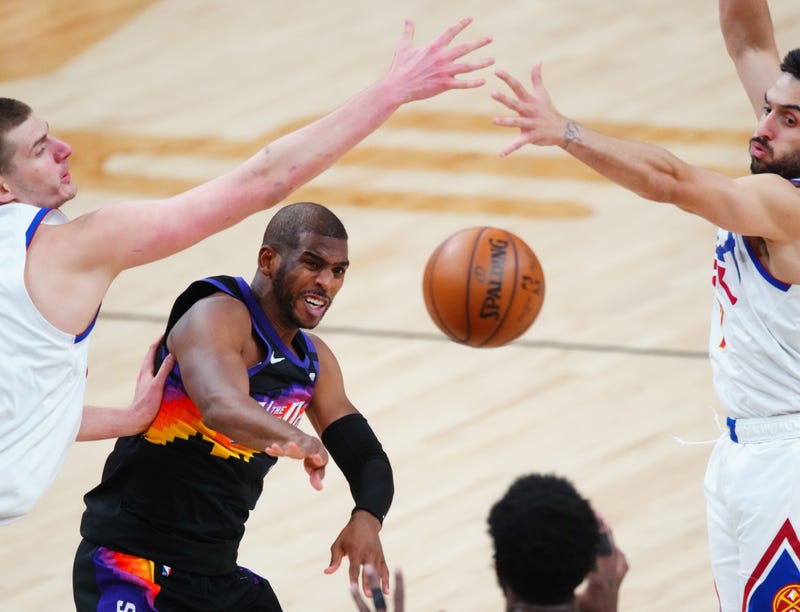 The debilitating shoulder injury that Phoenix Suns veteran Chris Paul suffered during the first round of the playoffs appears to be a non-issue in the second round. At least that's what his numbers suggest.

In the Suns' 123-98 beatdown of the Denver Nuggets in Game 2 of their West semifinal series on Wednesday night, Paul scored 17 points with a team-high 15 assists, helping Phoenix secure a commanding 2-0 series lead. According to the Elias Sports Bureau, Paul joined LeBron James and John Stockton as the only players in NBA postseason history with at least 15 points, 15 assists, and five rebounds in a game at age 35 or older.

At 36, Paul has revitalized his career and rejuvenated a franchise that hasn't appeared in the NBA Finals since 1993. And Suns radio analyst Tim Kempton admires the veteran floor general's leadership, both on and off the court.

"Anybody who knows Chris Paul, he is huge on watching film and learning. And one of the things he doesn't do is, he doesn't shut up. Chris Paul talks to everybody," Kempton told After Hours with Amy Lawrence on Thursday. "He talks to Deandre Ayton about post defense. He talks to [Devin] Booker, he talks to Cameron Payne all the time when they're on the sideline. If it's a stoppage in play on a free throw, Chris is the first one up on the sideline, telling Cameron Payne to come over there and tell him what he sees on the floor. He's very knowledgeable and he's a great communicator. He really puts a lot of time into talking to everybody.

"Sometimes you have people do it out there with their play, but Chris does it with his play, as well as talking. He's very knowledgeable. He spends a lot of time watching film. Even at this point in his career, where you think it would maybe take a little bit of a dip, he wants to know everything about everybody. The little nuances of these young guys. 'What do they like to do? What can I take away from them and make it a little bit difficult?' It's the communication that Chris has brought to the whole team that seems to have the biggest impact...

"The relationship between [head coach Monty Williams] and Chris, going back to New Orleans, has been huge on this team. I think it was a big part of Chris Paul wanting to come here and approve the trade. And also the respect that Monty has for Chris Paul, and his ability to be that on-court coach, he sees things, feels things... The respect is there. So, when Chris is talking, you'll see Monty kind of let him go, stand off to the side, and listen as well."

Game 3 of the best-of-seven series will take place on Friday night in Denver, with tipoff scheduled for 10 p.m. ET. According to FiveThirtyEight projections, the Suns currently have an 87-percent chance of reaching the West Finals for the first time since 2010.

The entire conversation between Kempton and Lawrence can be accessed in the audio player above.