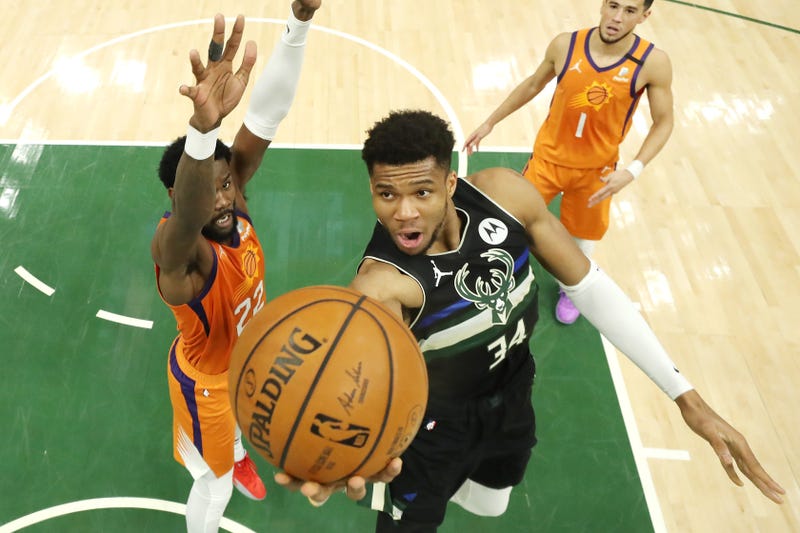 In the most important game of Giannis Antetokounmpo's career, he thrived.

The two-time MVP winner scored a historic 50 points in the Milwaukee Bucks' 105-98 win over the Phoenix Suns in Game 6 of the NBA Finals, leading the franchise to its first title in 50 years. According to StatMuse, Antetokounmpo became the first player in league history to record 50 points, 10 rebounds, and five blocks in a Finals game.

"It was iconic. Just the wherewithal to push himself like he did, and not only in this series, but in the others," former NBA player and Suns television analyst Eddie Johnson told After Hours with Amy Lawrence on Wednesday. "You have to give them credit for their perseverance, and then you have to give Giannis credit for being out of this world. In this series, he was fantastic after coming back from [a hyperextended left knee]. But tonight, it was just ridiculous.

Antetokounmpo, who was awarded the Finals MVP, averaged a team-high 30.2 points and 12.8 rebounds in 21 games this postseason. According to ESPN Stats & Info, he's the only player in history with an NBA championship, multiple MVP's, a Finals MVP, a Defensive Player of the Year award, five All-Star selections, and five All-NBA selections before his 27th birthday.

Milwaukee also became just the fifth team in history to rally from an 0-2 series deficit and win the Finals.

The entire NBA Finals conversation between Johnson and Lawrence can be accessed in the audio player above.