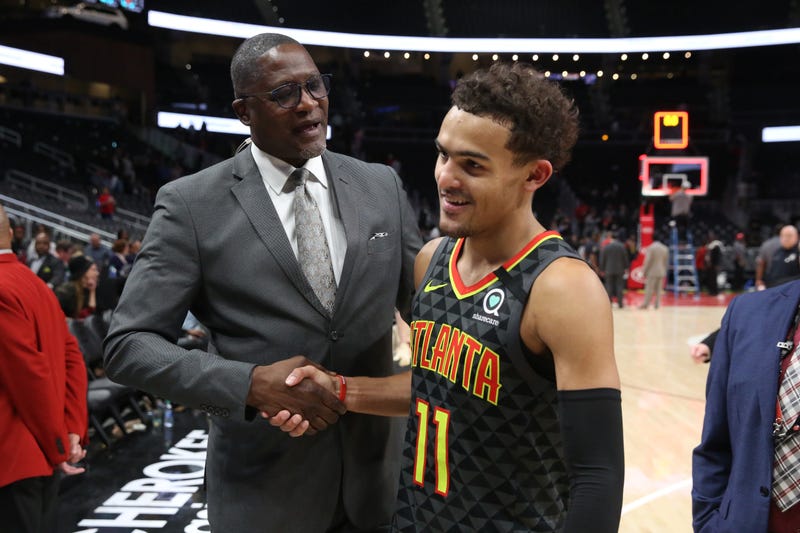 Dominique Wilkins knows a thing or two about being an NBA superstar with the Atlanta Hawks. And the Hall of Fame forward believes that Trae Young has already developed the skills to become the franchise's next legend.

"He's a legit, bona fide superstar in this league, in the making," Wilkins told The Zach Gelb Show on Friday. "And to see him grow the way he's had in the second half of the season and really become the leader and superstar on our team, it's been really fun to watch. So, I was not surprised that we eliminated [the Knicks] early... Outside of the rhetoric, and spitting, and throwing stuff on players, that's part of playoff basketball. I embraced that, during all the times I had been in the playoffs and seen that type of interaction from the fans.

"That's what it's about. So, Trae Young embraces that. He's a guy who doesn't get rattled. He welcomes it. And that's what great players do. They welcome that type of harassment and all these different things that fans do. That's a part of basketball..."

Young, the fifth overall pick in the 2018 NBA Draft, cemented his status as a Madison Square Garden villain in the Hawks' first-round gentleman's sweep of the New York Knicks. The 22-year-old phenom owned the spotlight in the world's most famous arena, scoring a combined 62 points in the first two games.

In Game 1, Young drained a go-ahead, last-second runner to clinch a 107-105 win, and while the boos rained down upon him, he gestured to the crowd to shush. Young's heroics and signal didn't sit well with Knicks faithful, as three nights later in Game 2, he was relentlessly taunted, and one courtside fan even spat on him.

Young finished with 36 points and nine assists in Atlanta's series-clinching Game 5 win. According to ESPN Stats & Info, he and Michael Jordan are the only players in NBA history with three straight 30-point games as a playoff visitor at the Garden. And since the merger in 1976, Young's 146 points in his first five career playoff games ranks seventh all-time.

"He's got that 'it' factor. That's it," Wilkins said of Young. "You've got guys who are talented, but you don't have a lot of guys who have that 'it' factor. He has it, and he's not afraid. He's a little guy who embraces it. He plays at one speed, and that's all-out. When you have a player like that, you can't do anything but applaud him. And I'm very proud of what he's done."

In the Hawks' 128-124 road win over the top-seeded Philadelphia 76ers in Game 1 of the East semifinals on Sunday, Young scored 35 points on 11-of-23 shooting with 10 assists in 39 minutes. He became just the second player in NBA history (Kareem Abdul-Jabbar/Lew Alcindor, 1970) to score 30 points in each of his first four career playoff road games, per ESPN Stats & Info.

Game 2 of their best-of-seven series will take place on Tuesday night, with tipoff scheduled for 7:30 p.m. ET. According to FiveThirtyEight's projections, Atlanta currently has a 59-percent chance of advancing to the East Finals.

The entire conversation between Wilkins and Gelb can be accessed in the audio player above.