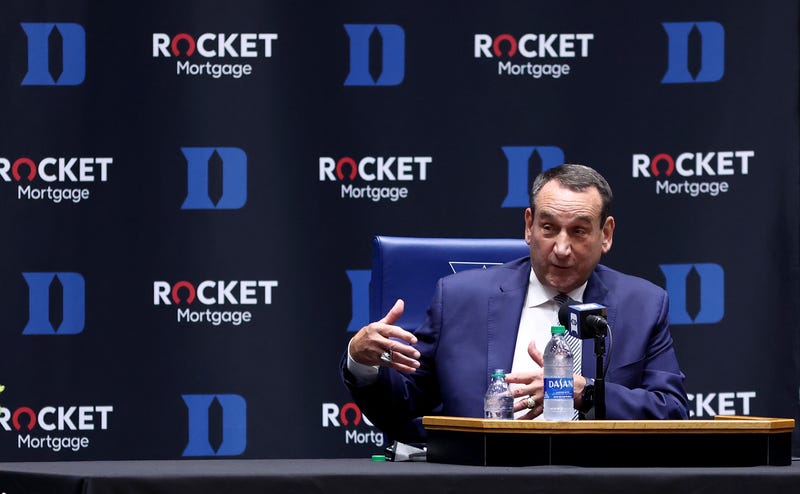 Mike Krzyzewski's 42nd season at the helm of Duke will be his last.

The university announced on Wednesday that Krzyzewski, the winningest coach in men's college basketball history, is retiring after the 2021-22 season. Blue Devils associate head coach Jon Scheyer, who played for Krzyzewski from 2006 to 2010, was named named Krzyzewski's successor.

During Thursday's edition of the JR SportBrief show, JR discussed Coach K's retirement announcement, and the Hall of Fame legacy that he'll leave behind at Cameron Indoor Stadium.

"This is tough. Coach K is an icon," JR said. "Coach K, just the image of his face, which seemingly hasn't changed in years, is just etched into college basketball. He's an iconic image. But college basketball is changing so damn much. Coach K can say it's time to call it quits. Yeah, he's 74 years old, okay, that's fine. But things always change. And Duke, to be honest, their brightest days might be behind them. Because there's an entire adjustment coming to college basketball...

"How am I going to remember Coach K? He's a legend, he's one of the last of a dying breed. We're moving into a different era of college basketball, of college hoops, and I really do believe that era is going to end with Coach K. [Kentucky head coach] John Calipari is a dude right now, and college basketball is going to continue to change, now that we've got one legend who's walking away. One more year, and Coach K is gone."

Krzyzewski, the architect of Duke's powerhouse program, has won 1,097 total games and five national championships with the school across 41 seasons. He's also a three-time College Coach of the Year winner, who's won 15 ACC tournament titles and taken the Blue Devils to the Final Four a dozen times.

JR's complete thoughts on Coach K and Duke can be accessed in the audio player above.