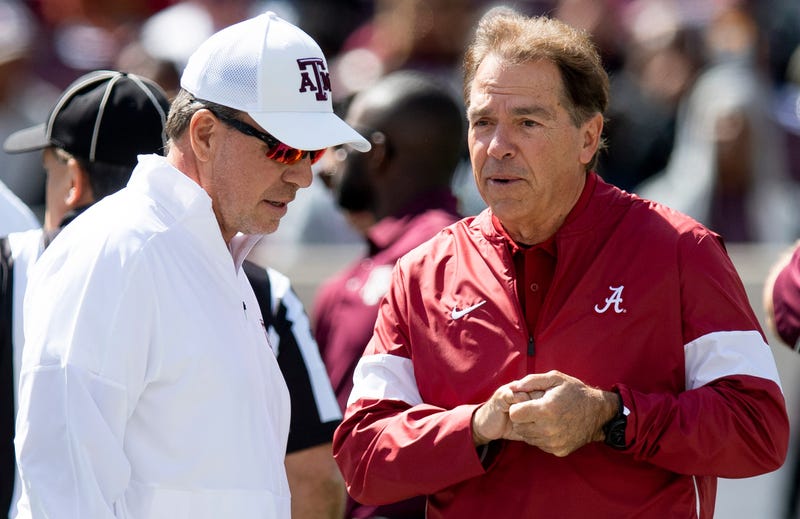 From 25 years as the greatest taskmaster who ever roamed a college sideline, we know that Alabama coach Nick Saban always has a purpose. His practices have purpose, his schemes have purpose. And every single thing that Saban utters into a microphone is the same. So when he publicly declared that Texas A&M was buying their players -- insinuating they had bent the rules to garner the nation's top recruiting class -- that was no mistake. His public apology in creating such a firestorm was transparent and disingenuous. He knew exactly what he was doing the entire time.

Saban's one of many coaches who've bellyached about the new NIL vagaries. The NCAA understands just how difficult it is to police, and it's throwing up its hands and begging for help. To be fair, the NCAA would also desperately ask for assistance in a sixth-grade spelling bee these days. But, here we are. The endorsement money piling up for college players is part of a new frontier that hasn't been settled yet, and the traditional powers aren't always the kingpins. Texas A&M figured out a way to outfox Alabama, and Jackson State nabbed a recruit from Florida State. Saban named them both in his diatribe.

Saban meant to throw gasoline on a burning fire, to build the inferno so large that everyone had to stare and gawk. The public at large has grown weary of penalizing schools. Their punishments seem ineffective, arbitrary, and drawn out. Fans understand how many billions of dollars are rolling in, and no longer battle against athletes reaping some of that. And since NIL rights have been instituted, college football and basketball results still look and feel relatively normal.

Georgia won a football title and Kansas cut down the nets. This might as well be 1988. Sure, there's massive player movement and interesting destinations. But Utah State isn't suddenly in the College Football Playoff, and The Citadel didn't reach the Final Four. The public looked at NIL, shrugged its shoulders, and kept scrolling the phones.

The NCAA is worse than Paul Blart these days -- a mall cop without a Segway or a taser. They're basically standing outside the mall, watching looters throw flat-screen TVs into vans, and looking around for the real police. It's why the NCAA has asked Congress to step in. So Saban attempted to pull the pin on a grenade and watch it blow up the building. He wants sirens and emergency vehicles on the scene. He wants someone to get angry, or fearful enough to step in and regulate this frontier town. Not that he's completely innocent.

Saban surely has benefitted from the existing grey areas of this new playing field. Just last summer, he strategically dropped a nugget that his starting quarterback would be making more than a million dollars. That'd certainly be enticing for a prospective quarterback in the recruiting process. If Alabama's collective happens to point that out to a high school player, that's a violation? But if that player happens to watch a video of that clip on Instagram, it's not?

Fisher's wild theatrics were hysterical -- not only because he sounded like a podcast playing at an accelerated speed, but because the notion of any SEC power claiming pure innocence is laughable. The SEC and all Texas programs have been swapping cheatin' chapters with 'crootin' for nearly a century now. Claiming the pious road in the most cut-throat football region of the world is merely kayfabe.

Fisher's defiance -- sounding like some Ross Perot puppet -- coupled with Saban's half-hearted apology, was terrific comedy. It's lawless out there, so the outlaws are having shootouts in the middle of Main Street. And Saban is shootin' off into the air, hoping some new sheriffs finally come to clean it up. Because before the rogues came through, he ran this town.