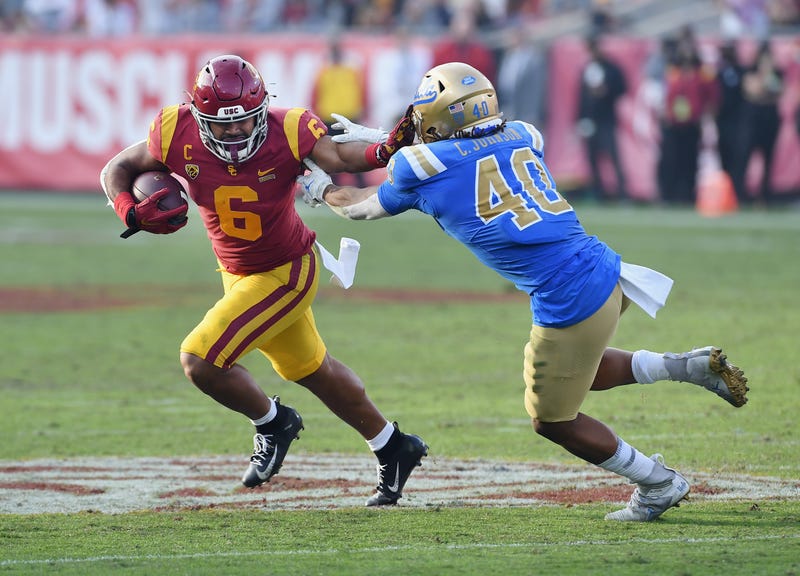 While college athletics have been a mutating industry since the start (Alabama was once a member of the SoCon), our current iteration is now dead. And the concept of a Power Five is no more, after USC and UCLA's landscape-altering decision to leave the Pac-12 for the Big Ten. Perhaps it's all for the best, since the notion of having enough elite programs to fulfill five separate conferences was already being stitched together with twine and duct tape. Now, there's a certainty -- the Trojans and Bruins departing means something has to give.

The league these two Los Angeles rivals leave behind is now destabilized to an unsalvageable degree. After the Big 12 gobbled up Houston, BYU, Central Florida, and Cincinnati last year, there's simply no more "next tier" teams left to make up for that massive loss. Boise State and Nevada? Fresno State and San Diego State? Those duos can't keep their legs under an already wobbly conference. So, it means the ACC, Big 12, and what's left of the Pac-12 will likely eat themselves. Perhaps the ACC and the Big 12 start divvying up the rest of the Pac-12. Maybe the ACC gets picked apart by the SEC, leaving just dregs of the conference to bond with the Pac-12 and create its own life raft. But with the defections of USC, UCLA, Texas, and Oklahoma, the Power Five condenses to a Power Four, at best.

The best-case scenario for the schools remaining from the ill-fated "alliance" of the Pac-12, ACC, and Big 12, is a redistribution to four power leagues. This would keep all 65 of the current power programs in a top tier that funnels into a playoff. And if you divide these 65 (the Power Five plus Notre Dame), into a quadrant of 16-team leagues, everyone keeps their seat at the table.

But what if the SEC and Big Ten decide to play ball by themselves, creating an AFC and NFC of college football? So, let's hypothetically say each expands to monster 24-team leagues. Perhaps the SEC grabs Clemson and Florida State, plus Miami and North Carolina. And the Big Ten may add Pittsburgh, Oklahoma State, Washington, and Oregon. This carving of the power teams would mean nearly 20 schools without a seat when the music stops.

So what happens to the schools without a tether to big media markets and/or high-performing football programs? Do Iowa State, Kansas State, Washington State, and Wake Forest (along with 14 others) get shunned into a Group of 5 league? Ask UConn to explain what happens when your football program is relegated to a second-tier conference. They went from playing in the Fiesta Bowl as a Big East squad, to middling in the AAC, and ultimately leaving the program on the curb like a plaid couch to allow its hoops programs to thrive.

The Pac-12's demise was set in motion by the failed Pac-12 Network. League commissioner Larry Scott neglected the media rights like a plant left without water, withering away in the hot sun. The Pac-12's annual television revenue was such a farce compared to other conferences, that those dollars became impossible to ignore in the Big Ten. And while the Pac-12 didn't have perennial playoff powers, it did have an incredible seven of the top-30 media markets in the country: Los Angeles (2), Bay Area (6), Phoenix (11), Seattle (12), Denver (16), Portland (21) and Salt Lake City (30). How do you blow a television deal that delivers those audiences?

Scott's uninspired leadership and the relative Pac-12 apathy toward football created a vacuum where UCLA and USC felt the need to leap. And this now means the remaining schools of the ACC, Big 12, and Pac-12 are looking over their shoulders, and sending their own distress calls. The end is near for the Power Five -- the Los Angeles schools just guaranteed it.