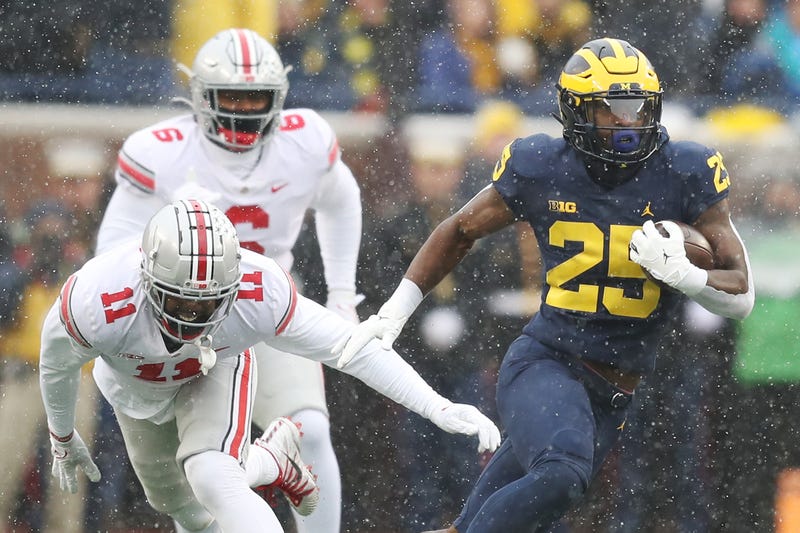 The debate on whether Michigan is the most talented team in the Big Ten and deserving of a spot in the College Football Playoff has ended. They squashed all doubts against their archrival in a momentous regular season finale.

With a trip to Indianapolis hanging in the balance, the fifth-ranked Wolverines resembled a true national title contender before a sold-out Big House crowd on Saturday afternoon, slaying rivalry demons in a resounding 42-27 win over second-ranked Ohio State. For the first time in program history, Michigan has reached the Big Ten championship game.

"Nobody expected this. Going into this season, I, myself, didn't expect much from Jim Harbaugh and this staff," former Michigan receiver Braylon Edwards told the Tiki and Tierney show on Monday. "Last year, they kind of waived the white flag against Ohio State with the COVID game. That's why Ryan Day made that quote, 'hang 100,' and boy, did that come back to bite him in the butt...

"Just based on the conversation, these guys aren't satisfied. They know they can beat Iowa [in the Big Ten title game]. They know they will blow Cincinnati out -- this is just me thinking for them. Alabama is a shell of what they used to be. They can get to where they want to be. And if you want to start talking the talk, they can beat Georgia as well."

Michigan, which had lost eight straight games against Ohio State dating back to 2011, didn't perform like an underdog on home turf. They exuded toughness in the trenches and ran the football at will, as halfback Hassan Haskins rushed for 169 yards on 28 carries with a rivalry-record five touchdowns.

The Wolverines' bend-not-break defense also stepped up in critical moments. Aidan Hutchinson, the team's premiere edge-rusher, recorded seven tackles and three sacks, and became the school's single-season sacks leader (13). According to the William Hill Sportsbook, he now has the third-best odds to win this year's Heisman Trophy. Since 1998, no defensive player has won the coveted award.

With the emphatic win, Michigan (11-1) will face Iowa (10-2) in the Big Ten title game on Saturday at Lucas Oil Stadium (8 p.m. ET kickoff). If the Wolverines beat the Hawkeyes and claim their first conference crown since 2004, they're all but guaranteed a place in the four-team College Football Playoff.

The entire Michigan conversation between Edwards and Tiki and Tierney can be accessed in the audio player above.