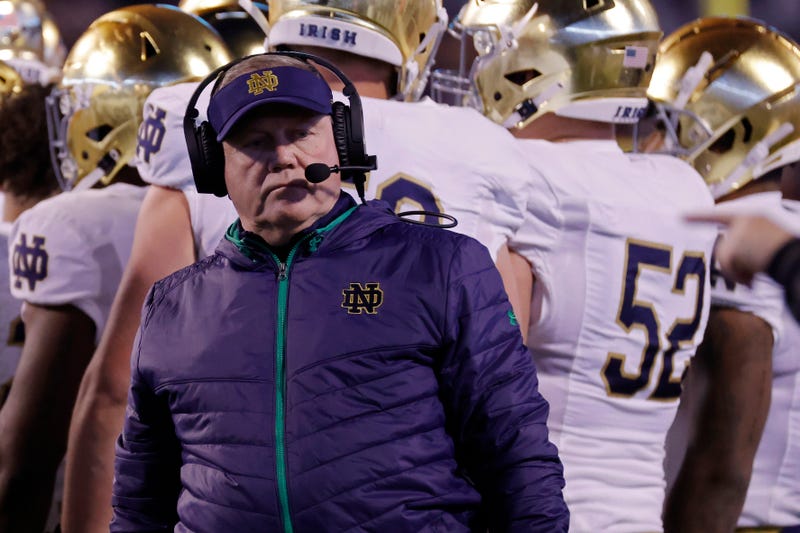 The highly-anticipated, penultimate College Football Playoff rankings were released on Tuesday night, and for the second straight week, Notre Dame narrowly missed a top-four spot, coming in at No. 6 overall.

While it's still possible for the Fighting Irish to leapfrog teams this weekend, they'll need quite a bit of help, as their independent standing and schedule means they're the only top-six team not playing in a conference title game. And to make matters even more difficult, Notre Dame just said goodbye to head coach Brian Kelly, who's officially taking over at LSU.

"Brian Kelly leaving just really changes the entire picture about Notre Dame," Athlon Sports columnist Bryan Fischer told After Hours with Amy Lawrence on Wednesday. "It's been a terrific season for the Irish. No doubt that being 11-1 at this point in the year with one close home loss, it's a great year. But when you do examine that record, there's obviously not a lot of meat on the bone...

"The Brian Kelly factor, it's going to be real. I think the selection committee is certainly going to consider it -- they've basically said as much. Maybe if the Irish quickly hire Matt Campbell and say he's going to be their coach for a potential Playoff game if there's chaos elsewhere, maybe that changes the narrative surrounding the Irish. Ultimately, the highest they're going to get is the No. 5 spot, and I have a hard time seeing them make that top-four."

Kelly, who signed a mammoth 10-year, $95 million contract with the Tigers, took over as head coach of Notre Dame back in 2010. He led the program to 11 winning seasons, and two trips to the Playoff. On Sept. 25, he surpassed coaching legend Knute Rockne with 106 wins with the school, although the NCAA doesn't acknowledge 21 of those games due to penalties.

Notre Dame finished 11-1 this season, and their lone loss came against fourth-ranked Cincinnati, back on Oct. 2. The team will spend Saturday scoreboard-watching, as they'd benefit from losses by No. 2 Michigan, No. 3 Alabama, and No. 5 Oklahoma State. The final CFP rankings will be released on Sunday.

The entire college football conversation between Fischer and Lawrence can be accessed in the audio player above.