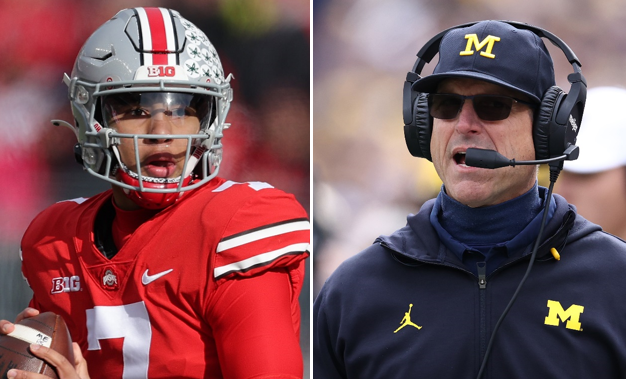 For the first time since 2016, archrivals Ohio State and Michigan will square off on Saturday as teams ranked in the top-five. And the highly-anticipated battle in Ann Arbor has major College Football Playoff implications, as the winner will advance to the Big Ten title game. Consider this an epic regular season finale.

Although the second-ranked Buckeyes are considered the favorite to survive inside a raucous Big House, the stage is set for the fifth-ranked Wolverines to snap their eight-game losing skid in "The Game." And a win would be the first for Michigan head coach Jim Harbaugh, who's 0-5 in the storied rivalry.

"It's important to note that, Michigan, we still don't know what they can do against a real top-10 team," CBS Sports college analyst Kevin Carter told the Tiki and Tierney show on Wednesday. "They've only played two ranked opponents all season long, one of which they lost to... But from an offensive standpoint, those guys haven't been stopped this season. Even in the loss to Michigan State, they had 400 yards passing, they had 150 yards rushing...

"They haven't been stopped yet, so they're confident. When you look at Ohio State, defensively, you better get yourself off the field and get the ball back into C.J. Stroud's hands, so he can make use of those weapons. You better do that, because if you don't, I think you may lose a time of possession battle with Michigan. They can run the ball, and they feel confident right now."

Michigan set up the do-or-die matchup by annihilating Maryland last Saturday. Wolverines quarterback Cade McNamara completed 21 of 28 passes for 259 yards and two touchdowns, while running back Haassan Haskins rushed for 78 yards on 20 attempts with two scores of his own.

Ohio State also won a critical home game against Michigan State in Week 12, as Heisman candidate C.J. Stroud threw for a whopping six touchdowns in a 56-7 drubbing. The Buckeyes' top-three receivers also eclipsed the 100-yard mark and scored, and running back Master Teague III rushed for 95 yards on 21 carries for a touchdown.

Entering this weekend, Ohio State's offense ranks first in the nation in average points scored, while Michigan's defense ranks seventh-best in average points allowed. According to ESPN's new Playoff Predictor, if the Buckeyes win out and claim the Big Ten title, they have a 99-percent chance to reach the CFP. As for the Wolverines, they have a 93-percent chance to play in the coveted four-team tournament with a win and conference crown.

The entire college football conversation between Carter and Tiki and Tierney can be accessed in the audio player above.