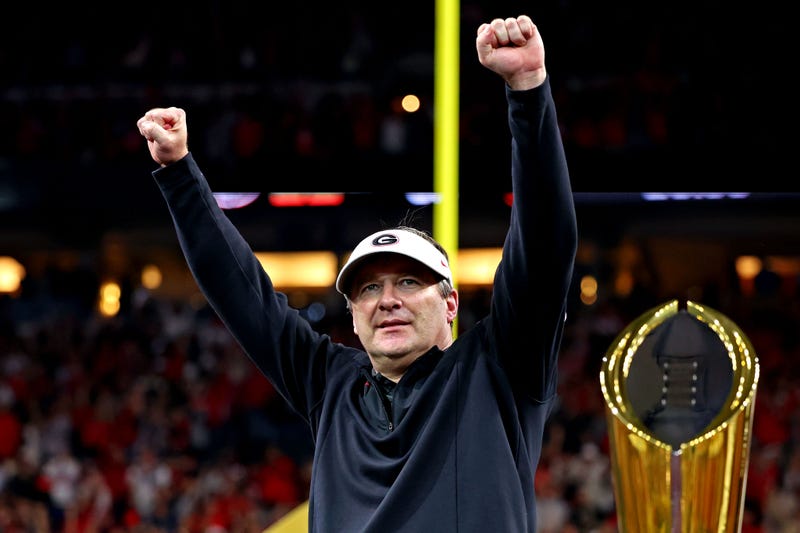 Georgia's decades-long reputation as a national powerhouse without a prized national championship has finally changed. For the very first time since 1980, they've reached the top of the college football mountain.

The Bulldogs slayed several old playoff demons on Monday night, outdueling SEC rival Alabama, 33-18, in the CFP national title game at Lucas Oil Stadium. And the wait couldn't have been any sweeter for Georgia coach Kirby Smart, who snapped a scrutinized losing skid against his mentor, Nick Saban.

"Kirby Smart is a guy who's wound so tight by nature, it means every bit and more than it can possibly mean to him," CBS Sports HQ analyst Josh Pate told After Hours with Amy Lawrence on Tuesday morning. "He never would've told you -- nor would anybody else with Georgia -- that it was about getting over the Alabama hump. They would've told you all the right things. Well, they'd have been lying to you. It absolutely was about Saban and Alabama.

"When Kirby got there in 2015, he told the Georgia folks, 'You think you're all-in on football? I just came from a place that's all-in. So if you want me to get this program to where they are in Tuscaloosa, here's what I'm going to need.' He put out the list, they checked every box. It took a little while, but they got there. These are folks who've gotten so close, so many times. These are also folks who legitimately believed they were cursed."

The opening half was anything but thrilling. A championship-record five field goals were made during the first 30 minutes, and Alabama entered the break with an uncomfortable 9-6 lead. But both teams woke up in the second half, combining for 36 points and five touchdowns.

Georgia quarterback Stetson Bennett delivered several clutch throws midway through the fourth quarter. Trailing by five with 8:09 remaining, he connected with receiver Adonai Mitchell for a miraculous 40-yard score in the end zone, and five minutes later, he orchestrated another monstrous drive, hooking up with star tight end Brock Bowers for a 15-yard touchdown off a screen pass. On the ensuing drive, Georgia's defense pulled off a pick-six, sealing the win.

The entire Georgia-Alabama conversation between Pate and Lawrence can be accessed in the audio player above.