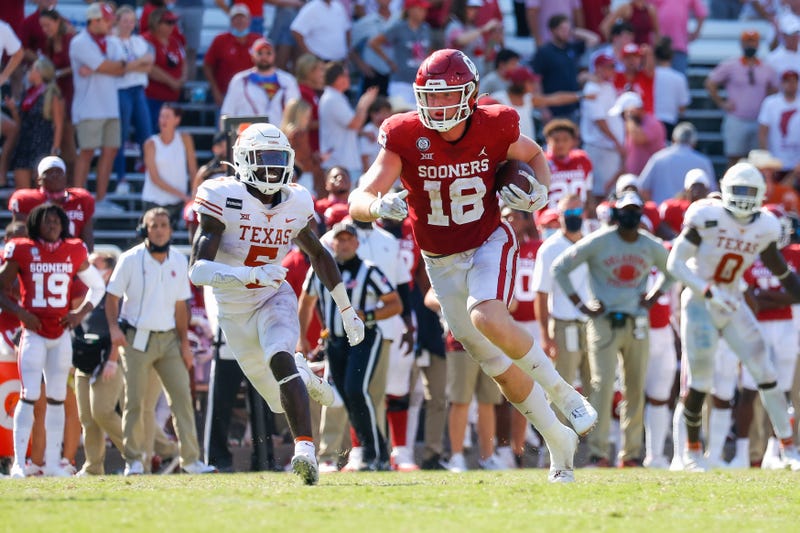 The blindsiding news of college football powerhouses Texas and Oklahoma reportedly wanting to leave the Big 12 conference for the SEC has grabbed headlines this week.

And if the historic departures occur, fans should say their final goodbyes to the Big 12, according to Fox Sports college football analyst Brady Quinn.

"I feel terrible saying this, but they're probably going to think about dissolving the conference and looking elsewhere," Quinn told The Zach Gelb Show on Friday. "I mean, you can look at Houston, right. Geographically, it makes sense. Big market. They've been competitive, too. Maybe it would make some sense there. Central Florida, even though it'd be kind of a stretch, given how east they are. But Orlando, another bigger-sized market, good football program. Cincinnati's a Group of Five team.

"You can look at some of the Group of Five conferences and try to poach some of those AAC schools. But the truth of the matter is, I think it's more likely that some teams start moving to the Big Ten, Pac-12 maybe. Maybe you see a West Virginia or someone like that go to the ACC. I would be surprised if this thing doesn't start dissolving rather quickly, that being their adjustment..."

The potential conference shakeup -- first reported by the Houston Chronicle on Wednesday -- would drastically alter the college football landscape, and create a 16-team mega conference. Texas and Oklahoma joined the Big 12 as inaugural members back in 1996, and since then, the storied rivals have won a combined 17 conference titles and 24 bowl games.

According to SI.com reporter Ross Dellenger, if both Texas and Oklahoma receive approval to join the SEC -- the conference requires a 75-percent or higher vote of "yes" from its current members -- the schools might stay in the Big 12 until 2025, when their media contracts with the conference expire. Leaving earlier would mean paying the Big 12 an exit fee of $70 million.

The 117th Red River Showdown between Texas and Oklahoma is scheduled to take place on Saturday, Oct. 9 in Dallas.

The entire college football conversation between Quinn and Gelb can be accessed in the audio player above.