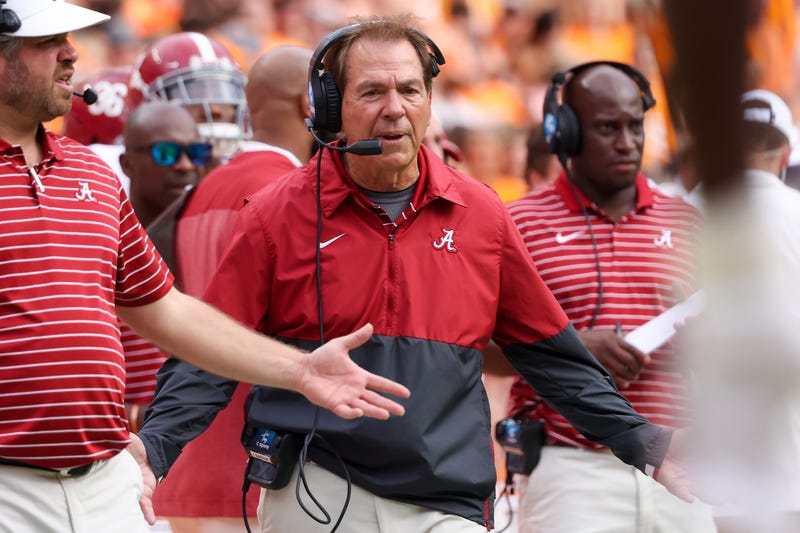 Perhaps the almighty Alabama will overcome adversity once again, leaving all the midseason doubters in the dust. But throughout the Crimson Tide's latest 52-49 road loss to SEC rival Tennessee in Knoxville, they felt like a far cry from the top-rated program that imposed fear and intimidation into opponents on a weekly basis. Alabama's crunchtime defeat, combined with the success from other conference programs, indicate that Nick Saban's vaunted squad may no longer be top dogs in college football -- or in the SEC.

It may've taken a 40-yard field goal from Chase McGrath at the buzzer for the sixth-ranked Volunteers to pull off the upset, but they were the better team in Knoxville. Jalin Hyatt was the top playmaker on the field, looking the part of an elite receiver in college football, racking up five touchdowns. Hendon Hooker might've thrown for 70 fewer yards than counterpart Bryce Young, but he had three more touchdown passes -- plus 56 yards on the ground. Hendon's four yards per carry also aided a three-headed Tennessee rushing attack featuring Jaylen Wright and Jabari Small.

The Volunteers' victory wasn't perfect, as their defense allowed a whopping 569 yards. But in the end, fans stormed the field. Tennessee found a way to come up with an elusive win against Alabama. And having lost their previous 15 matchups, the Volunteers will take a win against their big brother any way they can get it. Although the slim margin of victory could impact Tennessee's playoff ranking down the line, coming up victorious was most important.

After all, the last time the Volunteers defeated the Crimson Tide, Arian Foster delivered the go-ahead, one-yard scamper, as Phillip Fulmer's team escaped with a 16-13 victory. In the time since, Foster's had an eight-year career in the NFL, reaching four Pro Bowls before hanging up the cleats in 2016. Including Brady Hoke, who served as an interim head coach for two games back during the 2017 campaign, the Volunteers have had seven head coaches since then. Meanwhile in Tuscaloosa, the Crimson Tide have been much more fortunate. Saban's been at the helm since 2007.

Alabama has been far and away the better program, having won six national championships under Saban's control. But, there's evidence of fatigue with the Crimson Tide. Young's arguably the best quarterback in college football, but defending champion Georgia has a firm grasp on the SEC's top spot and the AP Top-25 poll rankings. Tennessee also climbed in the playoff rankings, moving up in both the AP and Coaches poll, and Ole Miss is currently on the outside looking in, holding onto the seventh spot.

The Crimson Tide remain superior to their in-state conference rival, Auburn. But with a 3-4 record, the Tigers are in massive disarray, with Bryan Harsin's exit imminent. Being the top team in the state is small potatoes to a program with sky-high standards, and it's unlikely to please anyone. But the alarming reality is that SEC schools are creeping closer to Saban's crew, and he won't be able to coach forever.

All of the sudden, next Saturday's date with 24th-ranked Mississippi State at Bryant Denny Stadium feels like a must-win matchup for Alabama. And a loss could create a situation where the Crimson Tide lose three games for the first time since 2010. That squad featured stars like Julio Jones, Dont'a Hightower, and Mark Barron, yet it was still a step below the teams that came after them.

The 2022 team gives off a similar type of vibe. Solid but not great, relative to the expectations. And with the combination of sweeping changes and great coaching talent within the SEC, it's fair to wonder if Saban's ceiling has been reached. If that's the case, can he return to that top level during the twilight of his career? In a crowded college football landscape, the answer may very well be no.

In his crustier old age, Saban sure doesn't seem like he'd be content getting forced out without another national title. He's too good to retire after playing in a bowl game that isn't in the College Football Playoff. But the ending of his career may not be as lavish or as ceremonious as the peak -- which saw him reach highs previously deemed unattainable.

By this line of thought, an early retirement is an easy way for Saban to avoid an embarrassing exit. After getting outdueled and outcoached by Volunteers coach Josh Heupel this past weekend, it's become clear that the 70-year-old coaching legend -- flashing his rings in Aflac commercials -- may never relive his glory days.

We strive to be a platform where varying opinions may be voiced and heard. The views, thoughts, and opinions expressed by the author(s) of this article and/or by those providing comments are theirs alone, and do not represent those of Audacy, Inc. We are not responsible for any damages or losses arising from this article and/or any comment(s).
Featured Image Photo Credit: Randy Sartin-USA TODAY Sports