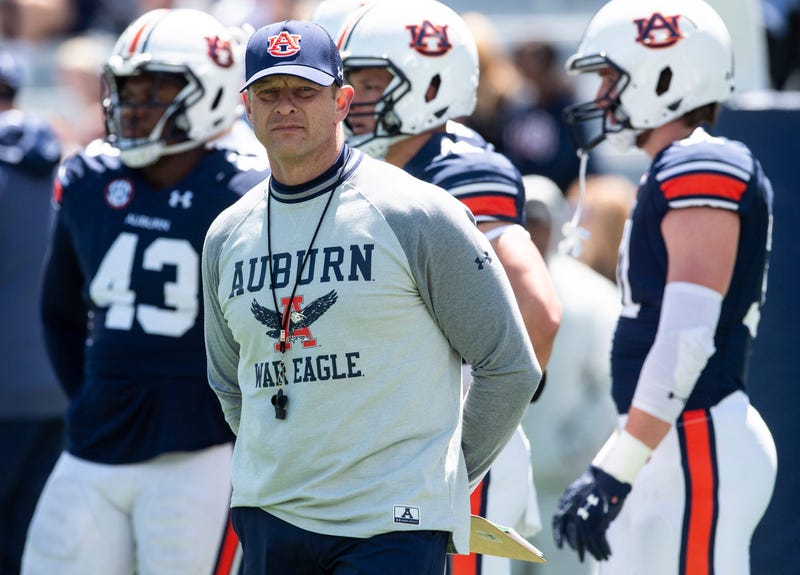 The popular saying, "Every ship needs a captain," speaks to the value a stable leader provides when faced with choppy waters. Good ship captains navigate through trying conditions with ease, while bad ones struggle to keep the ship afloat. For the Auburn Tigers, head coach Bryan Harsin's prowess as the man tasked with leading them through a tumultuous period will be examined under the microscope more than anyone -- or anything -- else in college football.

Had the Tigers been able to hold a 10-0 fourth-quarter lead in the Iron Bowl against SEC rival Alabama, their season might've had a very different ending. It's easy to believe the momentum gained from knocking off their conference foe would've likely allowed Auburn to defeat Houston in the lowly Birmingham Bowl. Minimally, they should've beaten an AAC team -- perhaps they would've made a better bowl and won that as well. Finishing 8-5 looks better than 6-7.

Instead, the collateral damage from an underwhelming campaign, paired with massive attrition within the program -- both among players and staff -- led to a university-led internal investigation that placed a spotlight squarely on Harsin. In the same way couples that sign prenuptial agreements usually don't stay married for long, Harsin returning after having his name dragged through the mud has an awkward feel to it.

Making the walk of shame through the locker room at Jordan-Hare Stadium to address the team couldn't have been pleasant for a guy who went 69-19 over seven seasons at Boise State. Facing such adversity is different down in SEC country, where unhappy donors and boosters have enough power to ouster their coach on short notice. Given the current level of dissatisfaction, Harsin would have to work standing up to avoid the ring of fire on his office chair.

In seven seasons with the Tigers, former head coach Gus Malzahn recorded double-digit win totals twice. And while his teams weren't awful, his inability to take the program to the next level wore thin among those who were tired of playing second fiddle to Nick Saban's squad in Tuscaloosa. But, so far, Harsin hasn't been anything reminiscent of an upgrade.

In a conference where having a big-time head coach strongly correlates with success, it's evident that Auburn is falling short. One would have to be out of their mind to think that Saban, Kirby Smart, Jimbo Fisher, or Lane Kiffin would allow the same type of mess to ensue. None of the aforementioned coaches are squeaky clean, but they're all experts at disallowing what happens in the dark to come to light.

Captain Harsin has lost grasp of the steering wheel, allowing the turbulence to jerk him and the school around. There might not be a solution to get it steady, and in the interim, the situation could continue to unravel. After consecutive matchups against Idaho and San Jose State, the Tigers will face Penn State, Missouri, and new-look LSU. Losing two of three to end the non-conference slate and start the SEC portion of the schedule could create a similar dilemma, akin to Ed Orgeron's in Baton Rouge. This isn't intramurals.

Harsin's best hope for a program savior might be transfer quarterback Zach Calzada, who led Texas A&M to an upset victory over Alabama. Then again, Calzada has been inconsistent, having lost the starting job to Haynes King right out of the gate last season. It also remains to be seen whether Calzada is an upgrade over Bo Nix, who departed for Oregon following back-to-back regression seasons, and after accounting for 23 touchdowns as a freshman.

On some level, predicting the fate of Auburn's future is opening a Pandora's box of unknowns. On paper, there's the potential for Harsin & Co. to silence the doubters. And they did start last season by winning six of their first eight games. On the flip side, it's almost impossible to confidently believe things will turn around, with the way 2021 spiraled out of control.

As is the case with any other problem in college football, winning will be the only solution that makes everybody forget about what's happened at Auburn. A quarterback guru and offensive mastermind by trade, playing an SEC brand of football that grounds and pounds opponents and forces turnovers, could be a translatable recipe for success. But, in a put-up-or-shut up sport, Harsin will continue to resemble a ship captain, attempting to keep his ship upright until proven otherwise.