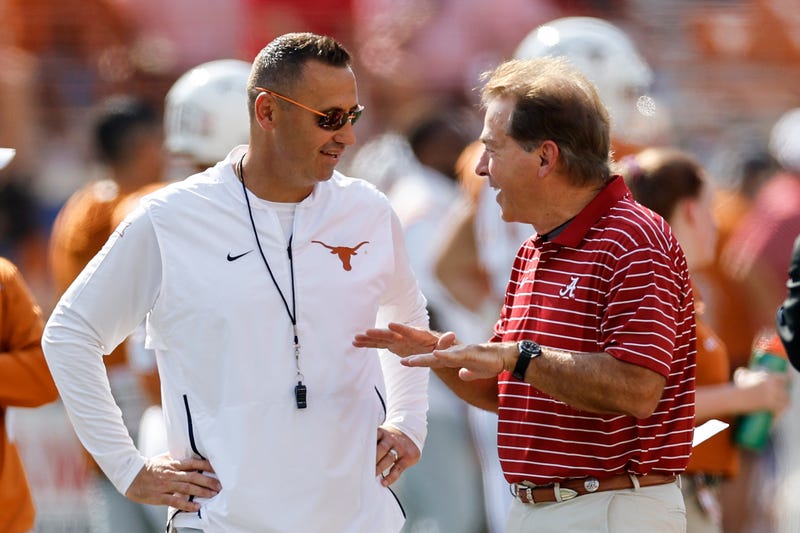 Sometimes, it's best to never meet your idol, in fear of being let down. More frequently, trying to overtake your mentor and own the mountaintop is a bad idea -- oftentimes never meant to work. Georgia head coach Kirby Smart did just that when his team beat Alabama in the national championship game last year, but for Texas head coach Steve Sarkisian, playing second-fiddle to Nick Saban -- the king of Tuscaloosa -- may be the best he can do.

Just like Smart, Ole Miss head coach Lane Kiffin, and Michigan State leader Mel Tucker, Sarkisian came from the budding Saban coaching tree. And unlike the aforementioned coaches who went there to reinvent themselves on the sidelines, Sarkisian attended the Tuscaloosa School of Rehabilitation, after falling off a tree professionally and succumbing to alcoholism. It's important to remember Sarkisian was the up-and-comer of college football at one point in time, having experienced success at Washington -- and then briefly at USC -- before experiencing personal struggles.

During Saturday's thriller in Austin, where unranked Texas came tantalizingly close to upsetting top-ranked Alabama, it looked like Sarkisian was going to finally add a statement win to his resume. And even after starter Quinn Ewers exited the game with an injury, the Longhorns hung tough and were less than four minutes away from storming the field in celebration. But, then reality set in, as the mighty Crimson Tide made up for an uncharacteristically pedestrian afternoon of struggles, skating by with a 20-19 win.

On a Saturday that featured Appalachian State taking down No. 6 Texas A&M and Marshall upsetting No. 8 Notre Dame in South Bend, Texas knocking off Alabama would've stolen all the headlines. Instead, the end result seemingly got lost in the fray. It was a scenario that, in many ways, was reminiscent of Sarkisian's career. A rapid riser, who had a flare for the dramatic, but never was quite good enough to captivate everyone's attention.

Slightly above average play defined the Longhorns, and it was hard to believe that he'd help them overachieve. Maybe his Southern California recruiting ties helped, but Sarkisian's lack of recent head coaching experience should’ve been a glaring downside.

Saturday's battle gave off the faulty impression that Texas was ready to tango in the SEC. Their lack of recent success indicates otherwise. Over the course of a 12-game regular season, every team is due for a down performance. Last year’s poor showing came in early October, when Alabama lost to Texas A&M. This season's dud just happened to arrive a little bit earlier for the Tide. When discussing his team's comeback over Texas, Saban -- the seven-time national champion -- gave his former pupil a pat on the back.

"They're going to be in the SEC. If they were in the SEC now, they'd probably be in the top half of the league," Saban said after the game.

Maybe Texas is making that massive leap from the Big 12 to college football's toughest conference, but who can say they're ready? In a show me business, Sarkisian hasn't proven he's ready to be recognized as a big-time coach, and Texas hasn't established itself as a big-time program.

Few coaches can match Saban's pedigree, accolades, and resume. An even smaller group of coaches can defeat him. While Sarkisian came close enough to landing in the latter category -- on a picturesque September afternoon that gave us a fun intraconference preview -- he's much further away from being on Saban's level than the final score indicated.

Until the hype and potential translates into wins for Texas, Sarkisian will look like the latest imposter trying to mimic Saban elsewhere. Perhaps what Smart achieved with Georgia has set the bar abnormally high for the latest chain of disciples. Coaches are rarely evaluated with sympathy in mind, and if reaching the Alamo Bowl in 2020 wasn't enough to save Herman in Austin, then a pair of regression seasons shouldn't be enough to keep Sarkisian off the hot seat.