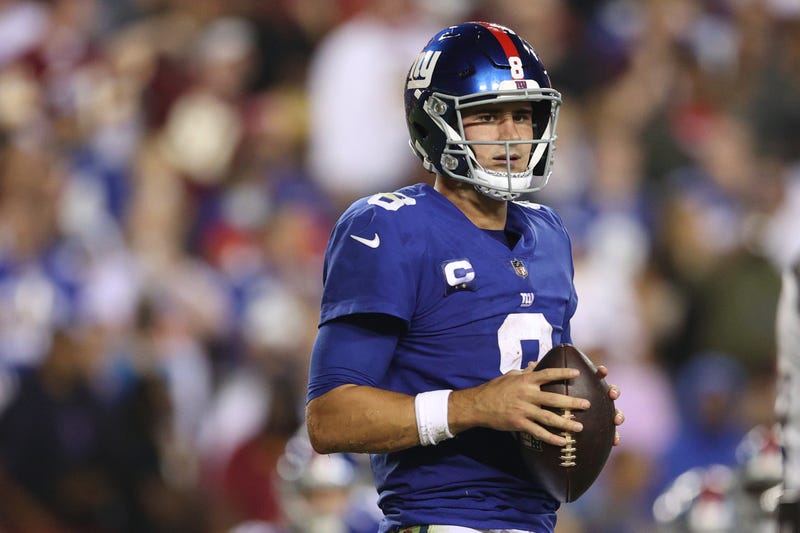 Daniel Jones didn't fold under the primetime pressure. He actually played one of the better games of his career on Thursday, completing 22 of 32 passes for 249 yards with two touchdowns against the Washington Football Team.

But the New York Giants' third-year quarterback didn't receive any favors from his teammates. In spite of Jones' winning performance, a slew of physical and mental errors late in the fourth quarter resulted in a gut-wrenching 30-29 loss to Washington at FedEx Field. For the fifth straight season and the eighth time in nine years, the Giants have started 0-2.

"I think this is the season, this is it. Daniel Jones is playing for his future in New York," NFL insider Benjamin Allbright told After Hours with Amy Lawrence on Friday. "He's got to come out and show he's not the reason why they're losing football games. And if that's the case, he'll get another go-around. But I think at the evaluation point right now, I don't think he's capable of being the guy who can overcome the problems that they have.

"And that puts him in a tough spot. Because there is obvious talent there, but there are mistakes as well. So, Daniel Jones has basically got to play perfect football for the rest of the year, and hope that's enough to be able to warrant another year's investment in him without them looking elsewhere."

The Giants didn't take advantage of Washington's miscues. Midway through the fourth quarter, with New York ahead 23-20, Jones threw a deep ball to a wide open Darius Slayton in the end zone, only to see it bounce off his hands and onto the grass. The gaffe cost the Giants six points and a two-score lead.

Jones also encountered bad luck two quarters earlier, with the score tied 7-7. A controversial holding call negated a highlight-worthy 58-yard touchdown rush by Jones, and ultimately forced the Giants to settle with a field goal on the drive. Overall, the team committed 11 penalties for a loss of 81 yards.

New York (0-2) will host the Atlanta Falcons (0-1) in a Week 3 matchup on Sunday, Sept. 26. According to FiveThirtyEight's projections, the Giants currently have a 12-percent chance to reach the playoffs and an 8-percent chance to win the NFC East.

The entire conversation between Allbright and Lawrence can be accessed in the audio player above.