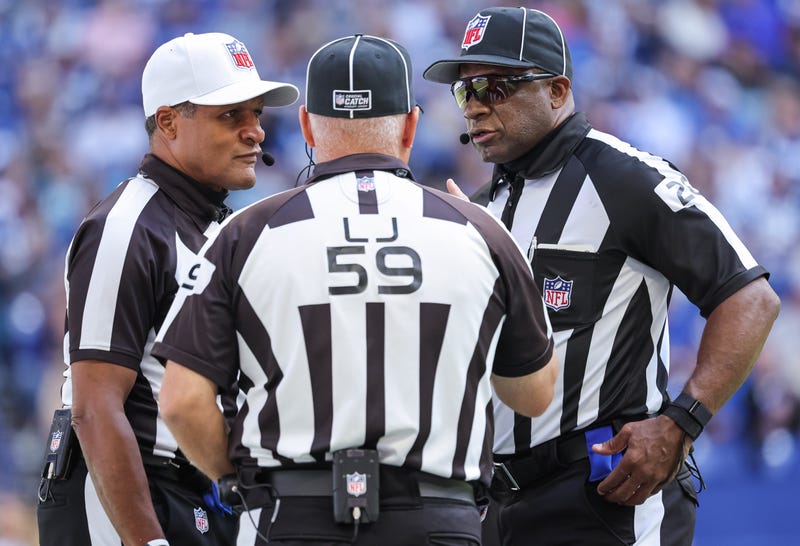 The Colts hiring Jeff Saturday is the most outside-the-box idea of the season. Long way to go, but so far, it's working. They defeated the Raiders and have a shot against the Eagles this Sunday. With Saturday's hiring as inspiration, here are some radical ideas that could help teams or make the NFL better. First, my innovations, and then options sent in by Maggie & Perloff show followers.

No. 1: Adapt college rules. They're so much better. I doubt the NFL wants to change its precious rulebook too much, but there's three specific college football rules they could learn from. First, change pass interference penalties to 15 yards. Receivers and cornerbacks hand-fight all the way down the field. The quarterback underthrows a ball by 10 yards, and boom, a 47-yard penalty. This rule has way too much influence on today's game.

Second, no more down-by-contact. NFL players being able to get up and run if they're untouched adds nothing to the game. It's just confusing. The bizarre end of Monday's game between the Commanders and Eagles could've been avoided if everybody knew that the second a player is down, the play is over.

What a flop. NBA worthy. pic.twitter.com/eG7AaTTQc5

Third, the clock stops for first downs. This one's extreme, and has the biggest downside: longer games. But, the comebacks in college football are amazing. College teams routinely drive the length of the field in 45 seconds. This would add even more drama to the NFL. Paul Pabst, my former colleague at the Dan Patrick Show, is a huge proponent of college finales. But that's probably just an excuse to tailgate longer.

No. 2: Bring back the Wishbone. The logical extension of the RPO trend is going back in time to the greatest offensive set ever developed. Forget all those receivers and line up three rushers in the backfield. And for anyone too young to remember old Southwest Conference shootouts, check out this clip with Troy Aikman running it at Oklahoma.

The obvious team to bring the Wishbone back? The 49ers. Maybe next year, when Trey Lance returns to action. Imagine lining up against Lance, Christian McCaffrey, Elijah Mitchell, and Deebo Samuel. The last-second decisions by the quarterback, the misdirections, the surprise throws -- it'd all be glorious. And it'd punish current-day defenses built to beat the Chiefs' passing attack.

No. 3: NFL Draft lottery. Tanking is as blatant in the NFL as it is in the NBA. Remember the epic Jets-Jaguars Tankathon from 2020 for Trevor Lawrence? This season, the Texans are unwatchable. But the best part would be the TV show. And it'd be way more intense than the NBA version, since fans are so much more invested in the NFL Draft these days. If all the non-playoff teams were put in a weighted lottery, you'd have epic watch parties and millions of fans anxiously tuning in to NFL Network.

And now, here are some less-realistic ideas that are still awesome...

Relegation. Copy international soccer leagues, send the bottom-two teams in the NFL to the XFL. Tanking would be gone forever -- imagine the intensity of late-season Texans and Panthers games. Coaches wear the uniforms, like in baseball. I'd pay extra to see Andy Reid and Mike McCarthy squeeze into a football jersey. Ban indoor stadiums. Football is meant to be played in the elements. All offensive players are eligible receivers at any time. No more alerting the officials. Make Aaron Rodgers a player-coach.

And now it's time for the best ideas from Maggie & Perloff listeners/followers.

No. 1: Penalize quarterbacks that attempt to draw the other team offsides. It's the worst play in football, and we're seeing it more and more.

If you intentionally try to draw a team offsides but don't, it's a 15 yard penalty.

No. 2: Nobody likes punts -- multiple people sent in this notion. Presbyterian coach Kevin Kelley tried this in college football with mixed results. The league has gotten more aggressive on fourth down, but a lot of fans want them to go for it even more.

Cut the Punter and go for it every 4th down. No punts...EVER.

No. 3: Limit the impact of offensive holding penalties. Nothing sucks the air out of a game like a holding call on a run play. League officials call it too often, only because the defensive player slips and falls.

Eliminate holding penalties at or behind the line of scrimmage. Destroys momentum and makes the game almost unwatchable if a ref decides to be vigilant. Most players agree there’s holding on any play if you look for it!

No. 4: CFL end zones. A huge end zone like they have in Canada would lead to an explosion in red zone creativity. The owners wouldn't want to take away those seats, but anything to increase scoring.

Adopt the CFL size end zone and width of the field.. let’s get crazy
120 points would be scored a game

No. 5: Get the fans involved. I understand this'll never happen, but there are definitely occasions where fans are better than the coach. And Broncos fans know just as much as Nathaniel Hackett in a late-game situation.

Give the fans a once a game anytime challenge. You have to submit your challenge through the nfl or teams app and needs to reach a 75% threshold within a certain amount of time. Imagine feeling like you could make a difference for your team & have the announcers play on the drama

I feel like not enough teams take advantage of the “you can literally push a runner” rule.

Coaches should experiment with plays where runners are pushed in an organized scrum.

I feel like some smart coaches could come up with some interesting ideas.

You have to go for it on anything less than 4th and 3.

All NFL stadiums should have to play ‘Jump Around’ before the 4th Quarter of every game.

How about making starting Quarterbacks punt. Call it the Danny White rule.

Overtime idea…treat overtime as a fifth-quarter. Just let the game continue until someone takes the lead. No additional coin flip needed, nobody complains about fairness, just let it play out.

Bring back tear away jerseys. No more pulling down someone by holding on to the jersey.

We strive to be a platform where varying opinions may be voiced and heard. The views, thoughts, and opinions expressed by the author(s) of this article and/or by those providing comments are theirs alone, and do not represent those of Audacy, Inc. We are not responsible for any damages or losses arising from this article and/or any comment(s).
Featured Image Photo Credit: Michael Hickey / Contributor / Getty Images