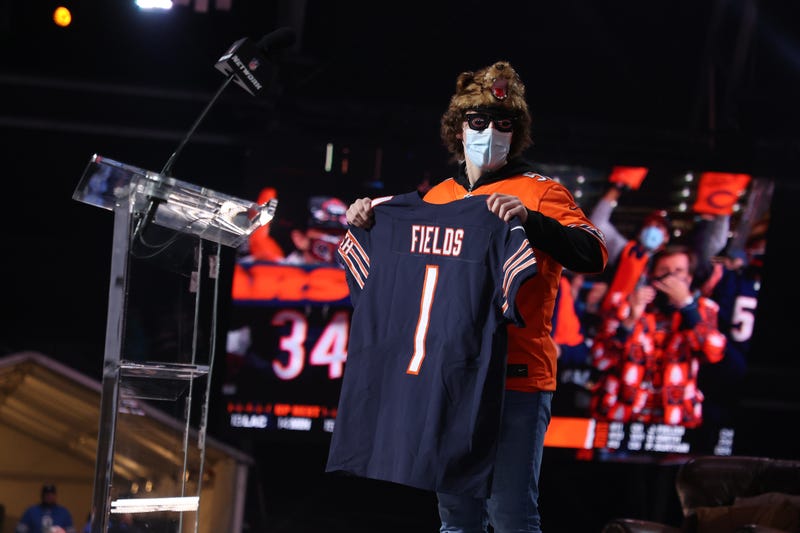 This may still be the plan, but fans can take solace in the fact that the future of the franchise now lies with Justin Fields.

On Thursday night, the Bears made a stunning trade with the New York Giants, moving up nine spots to draft the Ohio State quarterback with the No. 11 overall pick. Although the price for Fields was steep -- Chicago yielded the 20th overall pick, a fifth-round pick this year, and first- and fourth-round picks in 2022 -- the selection brought newfound hope to a scarred fanbase.

Chicago sports radio host David Haugh joined The Zach Gelb Show on Friday to discuss the Bears' shocking trade up for Fields, and what it means to the franchise moving forward.

"Everything's remote, so we're covering this, like a lot of people, just watching it on television," Haugh said. "And in the corner of the screen, you see the Giants trade down and you see the Bears' helmet and you're like, 'Oh my gosh, what's going on? And who's going to do what?' And there's this feeling of anxiety because it's like, 'Okay, [Pace] did it again.' And frankly, in Chicago, there's a ton of skepticism surrounding everything that Ryan Pace does. There's more concern about the person who's making the pick than the player who is picked. And that was the feeling going into No. 11...

"And then, you saw that it was Justin Fields. And your immediate reaction is like if you're watching Steph Curry or a three-point shooter. You're like, 'Oh my gosh, no no no, don't take that shot. No no no... Yes!' When you see who he came up with and the result, that was Ryan Pace taking his shot and making it. And that is why the reaction today around Chicago has been euphoric. There's a feeling that he missed on Patrick Mahomes. He missed on Deshaun Watson. Those were historically bad misses. But this is his time to make it right, and there's a feeling now that he made it right."

Fields, who surprisingly fell out of the top-10, was the third-overall prospect on Pro Football Focus' NFL Draft Big Board. Due to the pandemic and a restructured Big Ten conference schedule, the 6-foot-3, 228-pounder only played in eight games this past season. But, Fields made the most of his opportunities on the field, as he threw for 2,100 yards and 22 touchdowns, rushed for five scores, and led Ohio State to a national title game appearance.

By selecting Fields, it's safe to assume that Pace and Bears head coach Matt Nagy have bought themselves some time. Rather than being on the hot seat this season, they'll most likely stick around long enough to see how Fields develops and performs as a pro-level starter.

"I had Ryan Pace fired twice already. I didn't think he had earned the right to hire another coach after the John Fox debacle, and frankly, after last season, I thought they could've justified firing him again," Haugh said. "And here he is, seven years later, presiding over his seventh draft, without a playoff victory. I feel like that's where the skepticism was rooted and that's where I think we were heading into this draft. But, what happens now is, there must be some sort of understanding from his bosses that he has more than just next year...

"And in the Chicago media, there's this sense that a narrative's been created that next year it's playoffs or bust. But last night betrayed that idea. Last night, to me, changed and challenged that narrative..."

The entire conversation between Haugh and Gelb can be accessed in the audio player above.