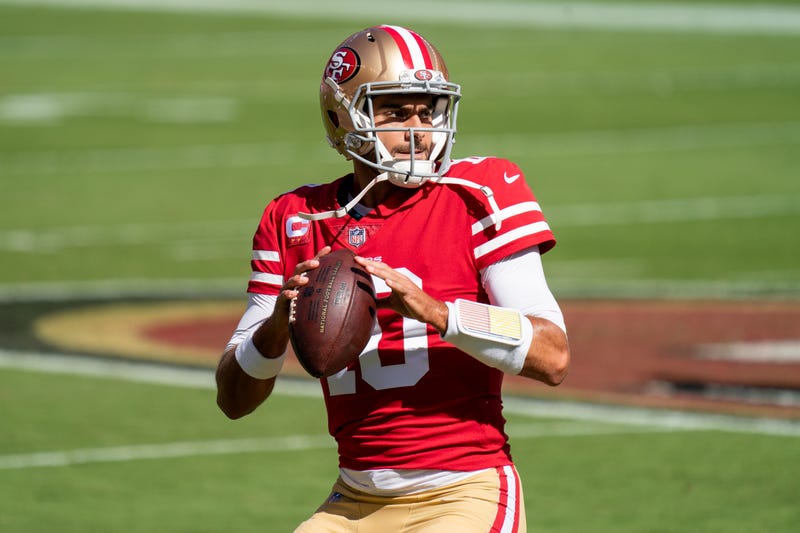 Jimmy Garoppolo became the highest-paid player in the NFL when he signed a record five-year, $137.5 million contract with the San Francisco 49ers back in February 2018. But things haven't exactly gone smoothly for the 29-year-old quarterback and franchise since they agreed to terms.

Across the past three seasons, Garoppolo has missed a total of 23 games, due to a sprained right shoulder, a torn ACL, and a pair of high ankle sprains. In his lone healthy season, which came in 2019, the 49ers happened to finish 13-3, and ultimately reached the Super Bowl. But Garoppolo has been labeled as injury-prone, and 49ers first-round pick Trey Lance is now considered their quarterback of the future.

"You have to remember, at that time [in 2018], Garoppolo took over a 1-10 team, and they won five straight. And you also have to realize there was some wretched quarterback play," San Francisco Chronicle reporter Eric Branch told After Hours with Amy Lawrence on Wednesday. "This was a franchise with [Joe] Montana, Steve Young, and Jeff Garcia. But man, there was a string of pretty bad stuff with Blaine Gabbert, and things like that. And then Garoppolo came, and you said, 'Wow, I forgot what good quarterback play looks like'...

"I don't think anyone really blinked when they gave him that contract. At the time -- for like two seconds -- he was the highest-paid quarterback or player in the NFL. It all made sense. But the next year, there's the torn ACL. The Super Bowl appearance -- but, as noted, not perfect, I guess in [head coach Kyle] Shanahan's eyes. And then last year, it was another lost season with his high ankle sprain. So, here we are."

49ers head coach Kyle Shanahan reaffirmed on Tuesday that Garoppolo has entered training camp as the team's starter, with Lance serving as the backup. Garoppolo is due to count $26.4 million and $27 million against the salary cap over the next two seasons, per Spotrac.com.

The entire 49ers conversation between Branch and Lawrence can be accessed in the audio player above.