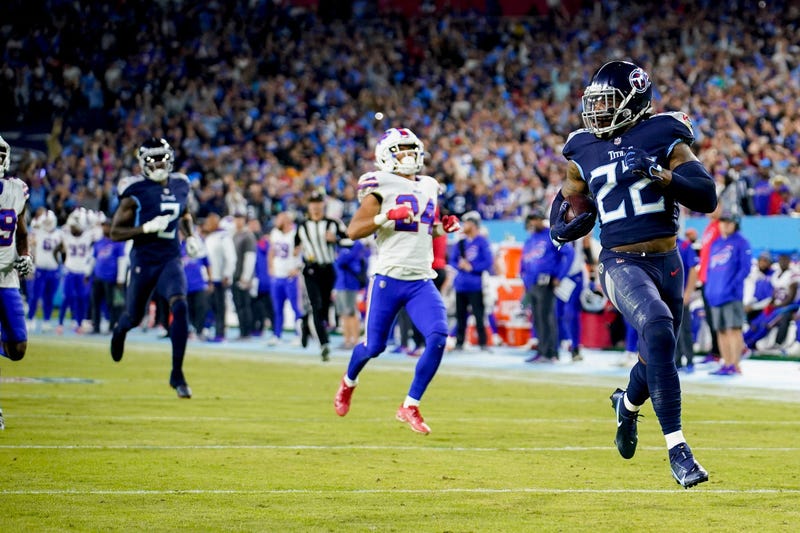 Derrick Henry is on a mission to become the first player in NFL history to rush for 2,000 yards in back-to-back seasons, and right now, there's no reason to believe that he won't accomplish the feat this coming winter.

In a battle between division leaders, Henry rushed for a whopping 143 yards and scored three touchdowns in the Tennessee Titans' 34-31 win over the Buffalo Bills on Monday at Nissan Stadium. According to ESPN Stats & Info, Henry is the first player to rush for 10 touchdowns within his team's first six games since 2005, and the first player with a 70-yard rushing score in five consecutive seasons.

"This guy, he's probably the best player in the NFL who's not a quarterback," Titans radio host Rhett Bryan told After Hours with Amy Lawrence on Tuesday. "The MVP, it's usually given to a quarterback. But if you weren't giving it to a quarterback, who'd you give it to? This guy is leading the NFL in rushing by a mile... We're watching something really historic here. This young man is on a path that, I believe, leads to Canton for him at some point down the road..."

Titans head coach Mike Vrabel didn't mince words following the team's upset win. He told reporters that the team continues to "jump on Derrick's back and he's willing and able to carry us," which makes sense, considering that they're 5-0 this season when Henry runs for three-plus touchdowns.

Henry is an inexorable force, with size and speed that defenses can only hope to contain. According to Next Gen Stats, the 6-foot-3, 247-pounder reached 21.8 mph on his 76-yard touchdown run during the second quarter, the fastest speed registered by any ball carrier this season. Through six games, Henry has rushed for 783 yards, well on pace to break the league records for rushing yards (2,105) and yards from scrimmage (2,509).

Tennessee (4-2) will host the Kansas City Chiefs (3-3) in a marquee Week 7 matchup on Sunday. According to FiveThirtyEight projections, the Titans have an 85-percent chance to reach the playoffs and a 79-percent chance to win the AFC South.

The entire conversation between Bryan and Lawrence can be accessed in the audio player above.