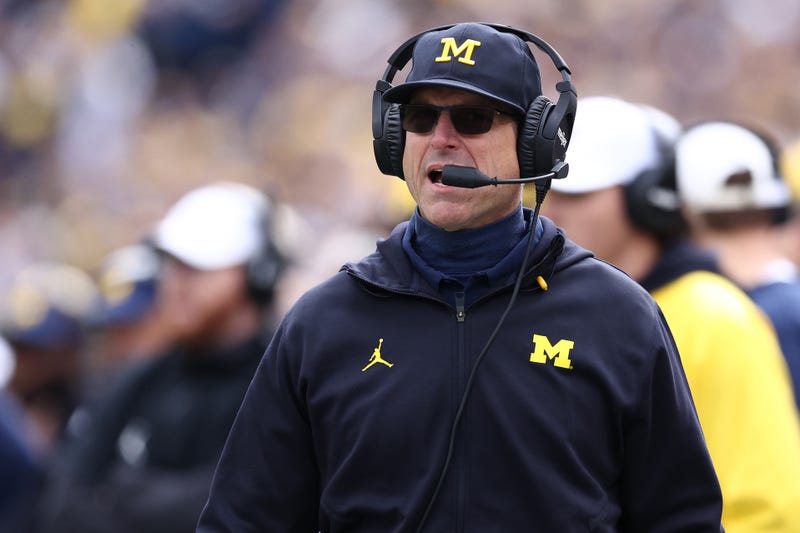 Jim Harbaugh's interest in leaving Michigan and rejoining the NFL appears to be growing. On Sunday morning, Fox Sports insider Jay Glazer reported that the 58-year-old head coach has already started contacting assistants across the country, in case a pro-level job is soon presented to him.

The 2021 season claimed the jobs of three head coaches on Monday, and the total number of open positions is currently listed at six. Although it's not clear whether Harbaugh would welcome any NFL opportunity, departing Ann Arbor sure seems likely, according to former NFL quarterback Jason Campbell.

"I think he's going to the NFL. Anytime you ever hear someone 'leak' that he's pondering going back to the NFL, that means he's already leaning toward the NFL," Campbell told The Zach Gelb Show on Monday. "And there's some really good jobs that are open. You look at the Raiders job, that's probably going to be one of the better jobs, because they're a team that made the playoffs with so much chaos that they had to go through this year.

"Jacksonville with Trevor Lawrence, that's a job people can look at and say, 'Hey, I may like that job as well'... Then there's the Chicago job. Chicago has always been a tough job because Green Bay has always won the NFC North... There's some really good openings. I could see Harbaugh going after Vegas. And now Miami, that could be another job because they have pieces there."

Harbaugh, who took over Michigan in 2015, led the program to its first Big Ten title and College Football Playoff appearance this season. The team's luck ran out during the Orange Bowl national semifinal on Dec. 31, as they were limited to just 11 points in a blowout loss to SEC powerhouse Georgia.

Prior to joining the Wolverines, Harbaugh spent four seasons as head coach of the San Francisco 49ers, where he went 49-14 and reached three straight NFC championship games and one Super Bowl. His team would've hoisted a Lombardi Trophy in 2013, if not for a goal-line stand by the Baltimore Ravens. Harbaugh's buyout to leave Michigan reduced to $2 million in 2021, and the number will drop by $500,000 each year until 2025.

The Miami Dolphins made the most stunning move during the NFL's dreaded "Black Monday," as they cut ties with coach Brian Flores after three seasons. Dolphins owner Stephen Ross, who happens to be a Michigan alum, denied interest in Harbaugh filling the void, telling reporters that he hopes he sticks with the Wolverines.

The entire conversation between Campbell and Gelb can be accessed in the audio player above.