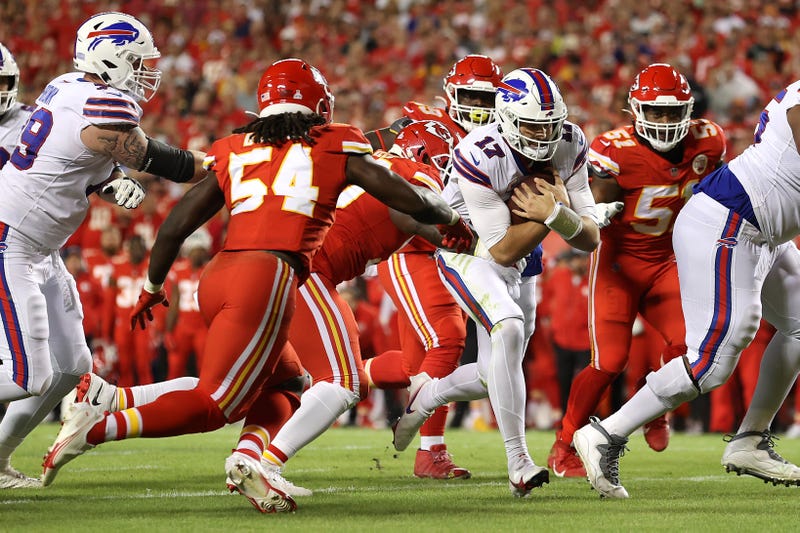 The Buffalo Bills have made it abundantly clear that they're not interested in traveling to Arrowhead Stadium for another AFC title game this season.

In spite of torrential rain and an hour-long weather delay, the Bills flexed their muscles on the road against the Kansas City Chiefs on Sunday night, as star quarterback Josh Allen totaled four touchdowns in a commanding 38-20 win. An all-around beatdown of the reigning AFC champions, on their home turf.

"I still don't feel this offense has played its best, which is scary," Bills reporter Sal Capaccio told After Hours with Amy Lawrence on Monday. "It was so wet out there, there were still some times where they couldn't really do what they wanted to do. They really looked good in the first half, throwing those chunk plays, and things like that. Defensively, I think this is as good as it gets.

"And you have to remember, defensively, they did this without [linebacker] Matt Milano, who's playing at an All-Pro level right now. A.J. Klein isn't the athlete Milano is, but he filled in for him tonight... They specifically targeted length. You know why? To be able to disrupt Patrick Mahomes. Tonight was as good and as clean of a defensive performance as you can ask for."

The Bills wasted no time in staking their claim. After allowing an opening-drive field goal, Allen orchestrated a 75-yard touchdown drive, capping it off with a keeper from nine yards out. His first-half numbers were Madden-esque, as he racked up 219 yards on seven completions with two passing touchdowns. Allen finished 15 of 26 for 315 yards with a team-high 59 yards on the ground.

Buffalo's defense also excelled in overwhelming Mahomes and Kansas City's offense. They forced four turnovers -- two interceptions and two fumbles -- and eliminated the deep-ball threat. The Chiefs' leading rusher happened to be Mahomes (61 yards), since running back Clyde Edwards-Helaire suffered a knee injury midway through the third quarter. According to ESPN Stats & Info, the Bills have scored 35 points in four straight games for just the second time in franchise history.

Buffalo (4-1) will visit the Tennessee Titans (3-2) in a Week 6 matchup on Monday, Oct. 18. According to FiveThirtyEight's projections, the Bills currently have a league-high 98-percent chance to reach the playoffs and a 94-percent chance to win the AFC East.

The entire Bills conversation between Capaccio and Lawrence can be accessed in the audio player above.