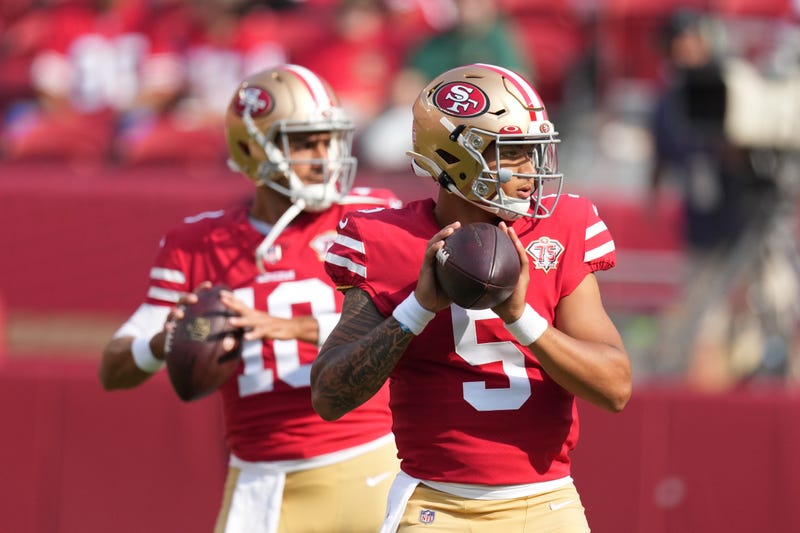 San Francisco 49ers head coach Kyle Shanahan told reporters on Sunday that "nothing's changed" in regard to the quarterback depth chart. In other words, veteran Jimmy Garoppolo, when healthy, is still the team's starter, with rookie Trey Lance serving as the backup.

Perhaps their Week 6 bye couldn't have come at a better time -- Garoppolo is recovering from a calf injury, and Lance is dealing with a knee sprain suffered in last week's loss to the Arizona Cardinals. But should Shanahan stick to his current quarterback plan? Are the 49ers better off starting Lance instead?

"What they'll do is probably go back to Jimmy G, and expand Lance's role," former 49ers lineman Randy Cross told The Zach Gelb Show on Wednesday. "It's going to be a great opportunity to keep giving him some reps, give him more in the double-digit neighborhood of reps. Contrary to what they say out in the Bay Area and on the internet, it's not exactly an insult to slowly develop your rookie quarterback.

"Watch what's happened to some of the rookies now, in his class, who are having to play every week. This isn't a real user-friendly football league for people who don't really know what they're doing. Patrick Mahomes watching Alex Smith was a perfect use and preparation of a young quarterback. I think Shanahan and Lynch have the ability and opportunity to do that. I just think they will. I don't think they're going to cave to all those little outside noises."

Lance, the third overall pick in this year's draft, starter his first game last week. He completed 15 of 29 passes for 192 yards with one interception, and ran for a team-high 89 rushing yards. Per NFL Research, Lance passed Tim Tebow for the fourth-most rushing yards by a rookie quarterback in his first NFL start in the Super Bowl era. Lance also underwent an MRI on Monday morning, and isn't expected to miss much time.

As for Garoppolo, who started their first four games, Shanahan is optimistic that he'll be ready to play following the bye. So far this season, the 29-year-old veteran owns a 66.1 completion percentage with 925 passing yards, five touchdowns, and two interceptions.

San Francisco (2-3) will host the Indianapolis Colts (1-4) in a Week 7 matchup on Sunday, Oct. 24. According to FiveThirtyEight, the 49ers currently have a 34-percent chance to reach the playoffs and a 4-percent chance to win the ultra-competitive NFC West.

The entire football conversation between Cross and Gelb can be accessed in the audio player above.