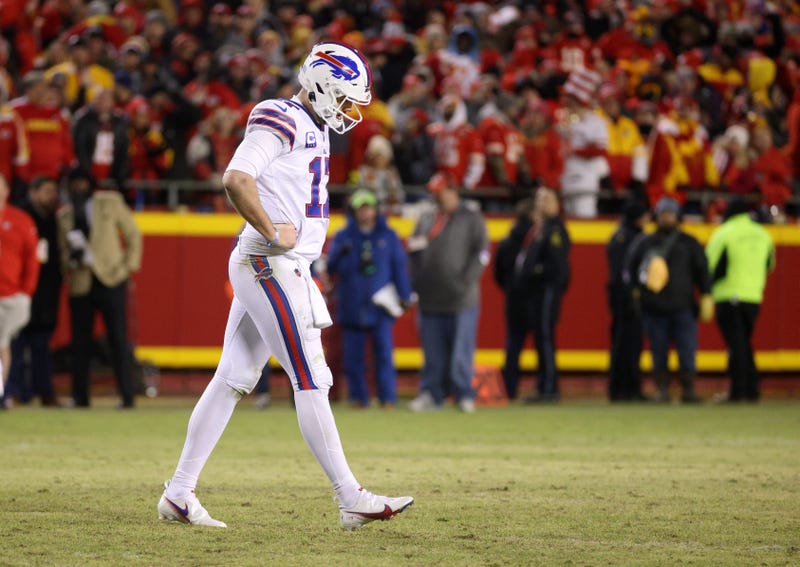 The game will live in infamy in Western New York. Alongside "Wide Right" and "The Music City Miracle" now resides "Thirteen Seconds," the triple crown of postseason sorrow. Buffalo Bills fans have done this dance before, trying to shuffle painful losses into the back storage room in order to make space for renewed optimism. Yes, Josh Allen is one of the league's best quarterbacks. The team has depth, balance, and playoff experience. But how many times can you try to forget the unforgettable?

Bills fans have taken residence in some type of divine comedy, so here's a pigskin version of Dante's "Inferno" -- Dante Alighieri's foundational work describing the netherworld. We offer this short guide to the nine circles of Hell, which serves as a countdown of the most wrenching losses in Bills history. Here's the increasingly painful levels of football purgatory, stained with wing sauce.

First circle: Limbo. "Texas Twisted." The Bills had finally snapped a 17-year playoff drought in 2017, but a second trip to the playoffs under head coach Sean McDermott just two years later was supposed to end better. A 16-0 lead with just 16 minutes left in Houston should've been enough to clinch a win. But questionable decisions by Allen and a leaky defense allowed Deshaun Watson to beat the Bills, 19-16, in OT. It was limbo for Bills fans: a celebration that the playoffs had finally become an expectation, but pain that it ended in collapse.

Second circle: Lust. "San Diego Chickens." In 1980, Bills fans desired more. Following four losing campaigns, the surprisingly exciting season culminated in an AFC East title. That brought them to San Diego, in a matchup against Air Coryell's Chargers. The ground-and-pound Chuck Knox Bills built a 14-3 lead at halftime, and were in front for most of the game, keeping Dan Fouts at bay. But, the lead dwindled to just one point, and the Bills missed a field goal and dropped a game-winning interception. On 3rd-and-1, with just over 2:00 left, Fouts shredded the defense for a 50-yard score to little-used Ron Smith. Who? It was incredibly his only catch of the day, and just his fifth of the entire season. The Bills had lost on a late defensive blunder (stay tuned).

Third circle: Gluttony. "Arrowhead I." The 2020 AFC championship game. McDermott knew his defense had its hands full with Patrick Mahomes and the Kansas City Chiefs. But an overly-conservative Bills gameplan limited what Allen could've been able to do. After holding the Baltimore Ravens to just three points in the divisional round, McDermott grew gluttonous in his belief the defense could suffocate another elite quarterback. It couldn't. Kansas City jumped out to a 38-15 lead, before garbage-time Buffalo points. Allen needed to be turned loose against the Chiefs to give them a shot. 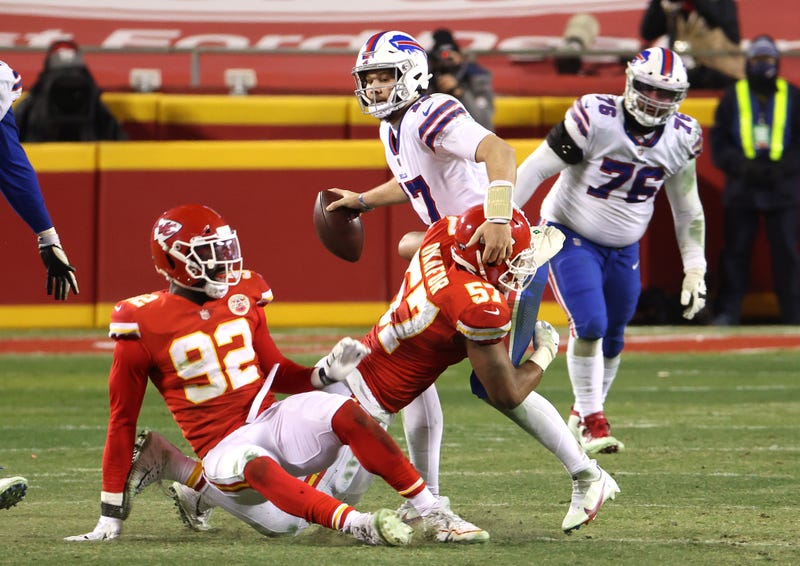 Fourth circle: Greed. "The Blowout." The 1992 playoffs sure looked like a quick trip. An injury to Jim Kelly and a wild-card slot foretold a hasty exit. Then the Bills took the field. They dug themselves a 35-3 deficit in their first game against Houston. Frank Reich engineered the comeback of his life to beat the Oilers, then the Bills shocked the top-seeded Pittsburgh Steelers on the road. That took them to Miami, as the second-seeded Dolphins had won the East. Buffalo knocked them off, too, delivering a third-consecutive Super Bowl appearance. But the football gods deemed the Bills too greedy. Kelly was reinjured in the Super Bowl, and the Dallas Cowboys landed one of the biggest blowouts in history, 52-17. Speaking of greed, Dallas would've nearly hit 60 points, had Leon Lett not celebrated prematurely.

Fifth circle: Anger. "Thurman's Helmet." After their first Super Bowl loss, the Bills were confident in a second trip. Another 13-3 season matched them up against Washington in the Metrodome, but even before kickoff, it spiraled downward. Thurman Thomas misplaced his helmet to start the game and missed the first two plays. Marv Levy screamed at the equipment manager, as his Hall of Fame running back searched frantically. The Bills began to unravel, and as Washington piled up the points and frustrated their opponents, Buffalo melted down. Andre Reed is caught in NFL Films slo-mo for eternity, jumping up and down and screaming at the refs, while slamming his helmet to the turf. The Bills were 0-2 in the Big Game.

Sixth circle: Heresy. "Music City Miracle." Fan-favorite Dug Flutie had lifted the 1999 Bills into the playoffs. But their coaching staff committed blasphemy by starting Rob Johnson against the Tennessee Titans in the wild-card round. Even without Flutie magic, Buffalo took a 16-15 lead on a field goal with only 16 seconds remaining. On the ensuing kickoff, tight end Frank Wycheck threw a lateral across the field to Kevin Dyson, who then ran 75 yards for the winning touchdown. The officials called it a legal lateral, while Buffalo fans have always contended it was a forward pass. Heresy. 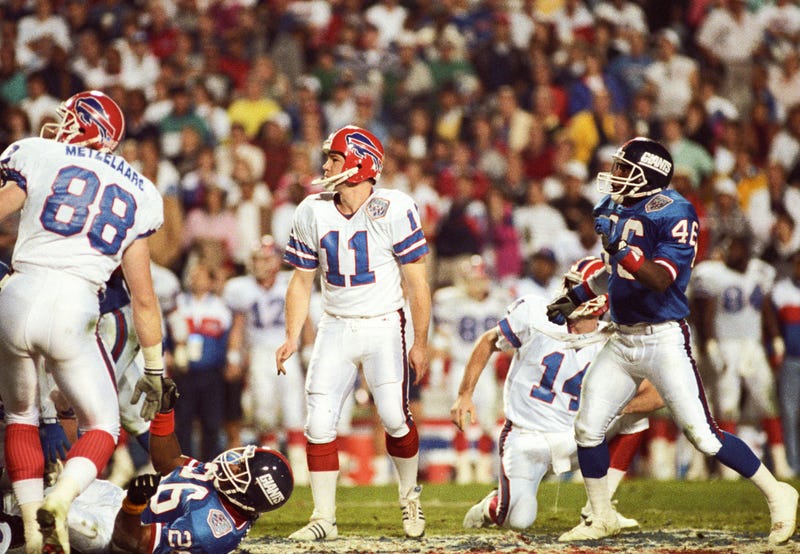 Seventh circle: Violence. "Thirteen Seconds." Squib kick it. Pooch kick it. But don't boot it out of bounds with 13 ticks on the clock. The 2021 Bills had the game won at Arrowhead in a rematch of last year's AFC title game. But a brain-lock on the kickoff, combined with far-too-cushy coverage on two pass plays, allowed the Chiefs to drill a game-tying field goal as the clock expired. Kansas City then won the overtime coin flip, drove downfield with ease, and scored a walk-off touchdown, forcing Bills Mafia to look for things to break.

Eighth circle: Fraud. "The Final Super Bowl." The 1993 Bills had teased their fans for three seasons, making the Super Bowl yet falling short every time. By the fourth run, America was openly rooting against Buffalo. No one wanted to see another Bills failure and another non-competitive Super Bowl. It had been nearly a decade since the AFC last won the Lombardi, and most of the games had been over at halftime. Vegas installed Dallas as 10.5-point favorites. But the Bills refused to apologize, and outplayed the Cowboys in the first half. Buffalo led 13-6 at the break, and had bottled up the explosive Dallas attack. This would finally be the night... or not. The Cowboys returned a fumble for a score, just a minute after halftime to tie. Then the contest pivoted drastically. Dallas poured it on from there, outscoring the Bills, 24-0, in the second half. More counterfeit hope for Bills fans.

Ninth circle: Treachery. "Wide Right." Buffalo's 1990 offense was a thing of beauty, a K-Gun machine led by four Hall of Famers: Kelly, Thomas, Reed and James Lofton. The Bills racked up 95 points in their two playoff games, and were favored by a touchdown over the Giants. They had beaten New York earlier in the season at the Meadowlands, and the Giants were starting their backup quarterback, Jeff Hostetler. This was the moment. In one of the epic Super Bowls ever, the Bills were stymied by a brilliant defensive coordinator named... Bill Belichick. Trailing by a point with just seconds to play, the Bills lined up for a 47-yard field goal, and Scott Norwood's kick went wide right. The unbridled enthusiasm and optimism felt by Bills fans during that season was smashed to smithereens. Their love, punctured with a bullet hole to the heart. The football gods dumped their faith into a trash can. And they still haven't been delivered from the pain. Simply treacherous.