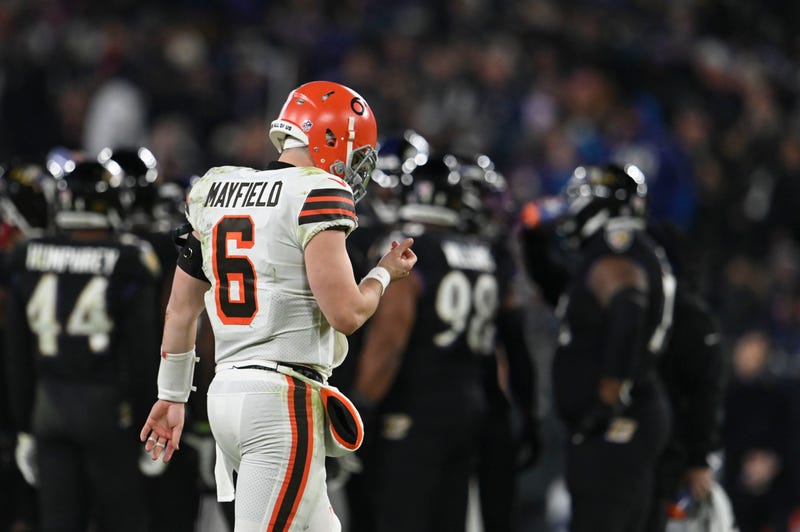 The Cleveland Browns, straddling the line between contender and pretender, entered their much-needed Week 13 bye on a sour note, as they scored one touchdown in a hideous 16-10 loss to the rival Baltimore Ravens on Nov. 28.

Entering the pivotal month of December, the Browns are 6-6, two games out of first place in an up-for-grabs AFC North race. And although the bruised and battered team hasn't showed the championship promise most fans expected, Tyler Dunne of GoLongTD.com still believes that they have the requisite talent to make a playoff push.

"I'm not saying they're going to win the Super Bowl. But I think a bye week is going to serve them well. I don't think we should sleep on them," Dunne told the Reiter Than You show on Monday. "Because the AFC North is such a mess and now Joe Burrow has the pinky [injury], let's not forget about the Browns. I think a week off is going to help Baker Mayfield. They know what they are with Nick Chubb, Kareem Hunt, and the best offensive line in football.

"The defense, there are problems, here and there. But they still have an elite pass-rusher in Myles Garrett, an elite cornerback in Denzel Ward. You can talk yourself into the Browns making the playoffs and being a team that nobody wants to play. A lot depends on Baker Mayfield and his health -- he's beat to hell -- but I like the Browns a lot."

Mayfield, battling shoulder and leg injuries, hasn't resembled a true franchise quarterback this season. In the team's road loss to the Ravens, he threw for 247 yards on just 18 completed passes with a touchdown and fumble, and in Week 11, he produced a season-low 53.2 passer rating in an ugly 13-10 home win over the lowly Detroit Lions.

Based on the numbers, the Browns' offense has been pedestrian through the first 12 games. The unit ranks 19th in the NFL in average points (21.2) and 24th in average passing yards (207.0), and Mayfield's scant QBR of 37.2 ranks 27th among qualified quarterbacks. Cleveland's saving grace is its defense, which has allowed the third-fewest yards (315.6) and 13th-fewest points (22.3).

The Browns will once again face the first-place Ravens in a marquee Week 14 showdown on Sunday at FirstEnergy Stadium. According to FiveThirtyEight, Cleveland currently has just a 20-percent chance to reach the AFC playoffs and a 10-percent chance to win the division.

The entire NFL conversation between Dunne and Reiter can be accessed in the audio player above.