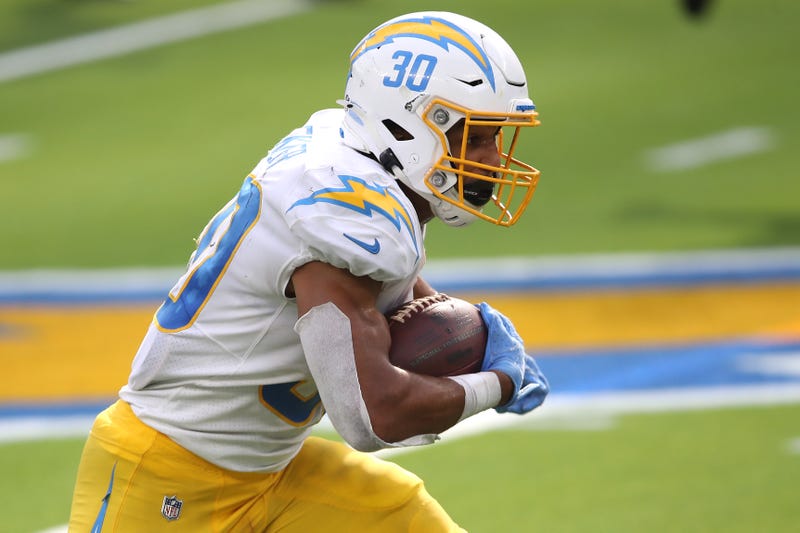 The Los Angeles Chargers, much to their delight, won't be in the market for a quarterback prospect during this week's NFL Draft. They checked that box last spring by selecting Justin Herbert with the sixth overall pick.

And according to Chargers running back Austin Ekeler, the franchise is all-in on the 23-year-old sophomore's makeup and superstar potential.

"It was pretty clear [in Week 2 of last season] that he was going to be something special," Ekeler told CBS Sports Radio's Tiki and Tierney show on Tuesday. "Just the way he handled himself, not knowing that he was going to be playing, and then coming off the bench cold and 'Hey, rookie, you're in' literally right before the game. I ended up injuring my hamstring last year -- I was out for about eight weeks -- and then came back, and just to see his development from when I was injured and came back was tremendous...

"He learned how to read safety flow. He's now pointing out protections when the center was doing it before. So, he developed and he basically forced himself into the starting role, and now he's our guy."

Herbert, who spent four seasons at Oregon, started 15 games for the Chargers in 2020, and threw for 4,336 yards with an NFL-rookie-record 31 touchdown passes and 396 completions.

Although the Chargers have a bevy of weapons on offense, they've struggled mightily to close out games in recent seasons, and practically turned crushing losses into an art form. Since the start of 2019, Los Angeles is 7-16 in one-score games, and these missed opportunities prompted the franchise to fire four-year head coach Anthony Lynn in early January.

"We're in Week 2 of our virtual offseason right now, so we've had plenty of confrontations," Ekeler said. "And I think the most important one to me was when [Staley] first called me, after he got hired, he called me and just wanted to talk about himself and get to know me as a person. And I thought that was really special. And now, we've gotten to know each other a little bit more. Now he's been implementing what he is envisioning for our team. And I think that's very important, too, because we don't have a lot of offseason time while we're together and we're at each other. So, it's going to be very important that he continues to just preach away.

"I asked him in a meeting, I was like, 'Coach Staley, what are you about? What's your message? As leaders of the team, we need something to get behind and we need to know what you're trying to push forward so we can be on the same page.' And so he's been jumping into all of our meetings, giving us messages, keeping us on our toes, saying how he wants it to be a very competitive but also very work-friendly environment. And I do appreciate that, especially during this offseason, when there's a lot of mental game and a lot of learning going on. It's more of just like, 'Hey, let's get to know each other so we can come to training camp and get after it.'"

The entire conversation between Ekeler and Tiki and Tierney can be accessed in the audio player above.