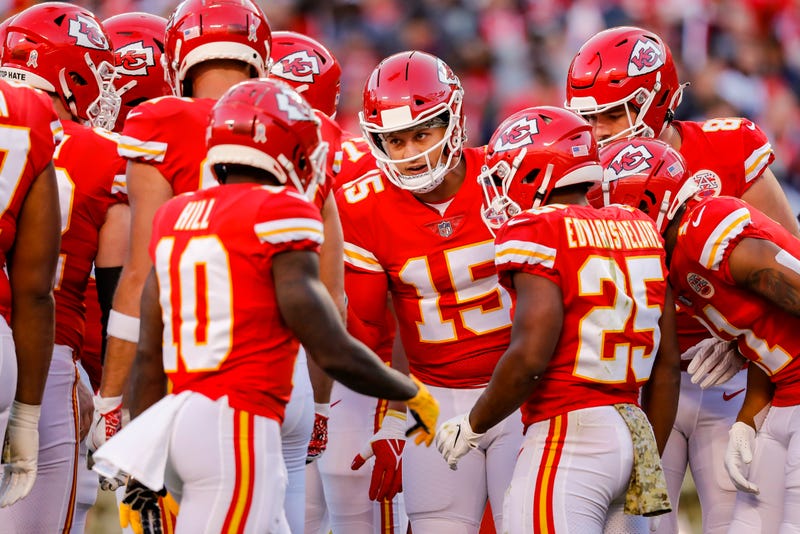 The reigning AFC champion Kansas City Chiefs entered their much-needed Week 12 bye on a high note, defeating the feared Dallas Cowboys at home back on Nov. 21 to extend their winning streak to four games.

And although the Chiefs' high-powered, high-octane offense isn't functioning at an optimal level yet, they've managed to correct mistakes and clean up the sloppiness. Consequently, Patrick Mahomes is making adjustments and once again channeling his MVP-caliber form on the field.

"It's been a bit of a new phase in Patrick's development, to realize patience is really going to have to dictate a lot of what they do," Kansas City Star reporter Vahe Gregorian told After Hours with Amy Lawrence on Friday morning. "He's one of those guys who's naturally inclined to look for the big play. He's not undisciplined, but it's different for him to be saying, 'Okay, I'm ready to go to that option in the flat or check it down.' He's always growing, very smart.

"He's got a great notion of the field, he understands that he can always get better. And that's sort of this new element he has to really get comfortable with, biding his time a little bit better... Also, a couple times, he's had trouble distinguishing between a high risk-reward ratio and just going a little too far. He's not reckless, though. He's had reckless moments, but people have misconstrued him at times, thinking he just flings it."

In the Chiefs' win over the Cowboys, Mahomes completed 23 of 37 passes for 260 yards and one interception. Although his 11 season picks ranks fourth-highest in the NFL, he's committed just three in his last five games. As for the major passing categories, Mahomes currently ranks fifth in total yards (3,200) and third in touchdowns (27), and the unit overall ranks second in average yards (402.4) and ninth in average points (25.5).

Kansas City (7-4), which holds a one-game first place lead in the AFC West, will host the rival Denver Broncos (6-5) in a primetime Week 13 matchup on Sunday night. According to FiveThirtyEight's projections, the Chiefs have an 85-percent chance to reach the playoffs and a 64-percent chance to win the division.

The entire Chiefs conversation between Gregorian and Lawrence can be accessed in the audio player above.