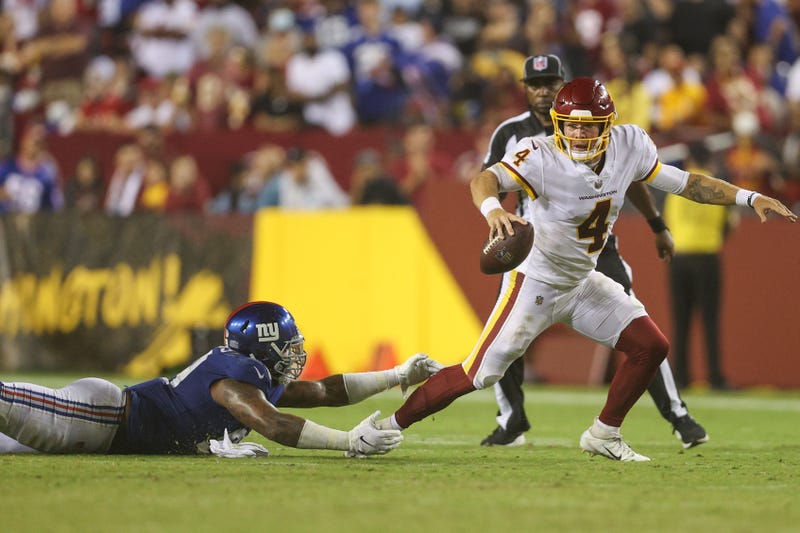 Ryan Fitzpatrick might not get his starting job back when he returns from a hip injury in a couple of months. The Washington Football Team once again appears to have another viable option at quarterback.

In a game chock-full of twists and turns, chaos and confusion, fourth-year quarterback Taylor Heinicke played the role of hero, completing 34 of 46 passes for 336 yards with two touchdowns in the team's thrilling 30-29 win over the New York Giants on Thursday night at FedEx Field. An instant classic. JR discussed Heinicke's performance during Thursday's JR SportBrief show.

"Heinicke, right now tonight, looks like a legitimate NFL starter. And that's not an overreaction -- that's based on what we saw in the [2020] playoffs against the Bucs," JR said. "Did they win? No. But we even knew at that point in time, Heinicke, he's a bad dude. He's not going to quit. He's passionate about what he does. He gets these guys going, he gets them hyped up... I'm sold even more tonight.

"The dude who was thinking about getting his engineering degree at this point last year, he just won his first career start on Thursday Night Football against a rival in the Giants... Fitzpatrick, he's not even a thought. This man has a dislocated hip. And I know that he might be football elderly, but in the NFL, that's kind of tough, too. I think Heinicke holds onto this job for the remainder of the season."

With less than five minutes left in the fourth quarter, Heinicke orchestrated an instant two-play, 75-yard touchdown drive, giving Washington a 27-26 lead. Although he threw a costly interception on their ensuing drive -- the Giants managed to re-take the lead on a 35-yard field goal at the two minute mark -- Heinicke still had some magic up his sleeve.

The Thursday night thriller ended with an 11-play drive, and Heinicke taking the offense down to New York's 30-yard line. With five seconds remaining, kicker Dustin Hopkins split the uprights, handing the Giants their fifth straight season with an 0-2 start.

JR's complete thoughts on Heinicke and the Washington Football Team can be accessed in the audio player above.