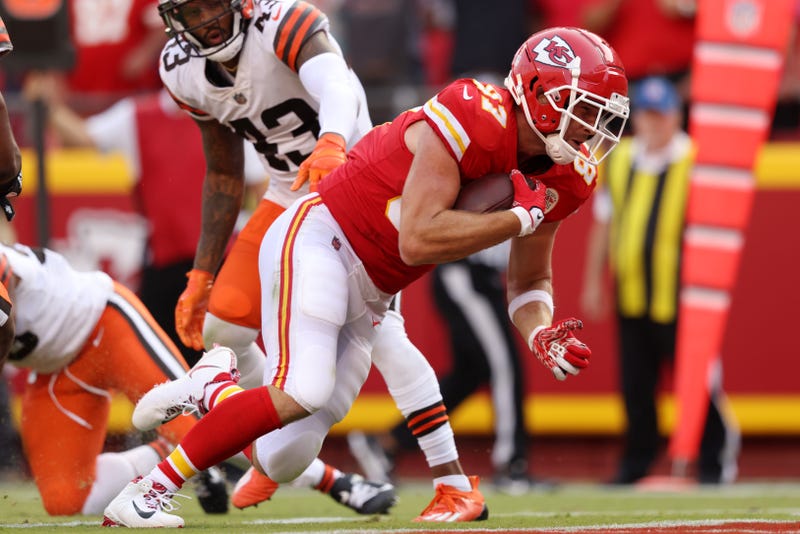 The Kansas City Chiefs, stocked with elite offensive weapons, are primed for a third straight trip to the Super Bowl this season. Of course, hoisting another Lombardi Trophy will be no easy feat -- only three teams in NFL history have won it all after coming up short the previous year.

But the Chiefs' championship window is wide open, and superstar tight end Travis Kelce believes that the team avoided a dreaded offseason hangover thanks to locker room leadership and the desire to evolve on the field.

"How we performed in the Super Bowl wasn't very characteristic of us, and we know that," Kelce told the Tiki and Tierney show on Tuesday. "And I take pride in that. There's a lot of honor in going out there and doing the right things for the guys around me and making those plays for the guys around me. And I didn't do that to my full capability last year.

"So, that's why we've got a chip on our shoulder to go back and try to win another Super Bowl. As a competitor, if you're not getting fired up -- week in and week out -- to keep getting better and finding ways to win football games, you're in the wrong profession. Complacency can sneak up on you, but it's real and you've just got to be aware of it."

On Sunday, Kansas City proved that its offense can still flip on the switch whenever necessary, as they rallied from a 12-point halftime deficit to defeat the Cleveland Browns in a 33-29 thriller at Arrowhead Stadium. Chiefs star quarterback Patrick Mahomes threw for 337 yards with four total touchdowns, and connected with Kelce on two scores during the second half.

Kelce was an inexorable force in 2020. He eclipsed 1,000 receiving yards for the fifth consecutive season, extending his previously established record of four such seasons for tight ends. He also set a single-season record for the most receiving yards (1,416) by a tight end in NFL history, and became the fastest tight end to reach the 500-reception plateau (95 games).

Although Kansas City is the consensus favorite to win the AFC West in 2021, the division may have some competitive races down the stretch. On opening weekend, the Chiefs, Los Angeles Chargers, Denver Broncos, and Las Vegas Raiders won their games. A perfect 4-0 start to the campaign.

"With everybody being that great in this division, it's tough," Kelce said. "You've got to play everybody twice and it's hard to beat a team twice. We've already had a lot of battles in years past. Divisional games always seem to be just a one-score difference. We know we're always going to get a big-time dogfight every single time we play the Raiders, Chargers, or Broncos."

Kansas City (1-0) will visit the Baltimore Ravens (0-1) in a Week 2 matchup on Sunday, Sept. 19. According to FiveThirtyEight's projections, the Chiefs have an 86-percent chance to make the playoffs, and a 55-percent chance to win the AFC West.

The entire conversation between Kelce and Tiki and Tierney can be accessed in the audio player above.