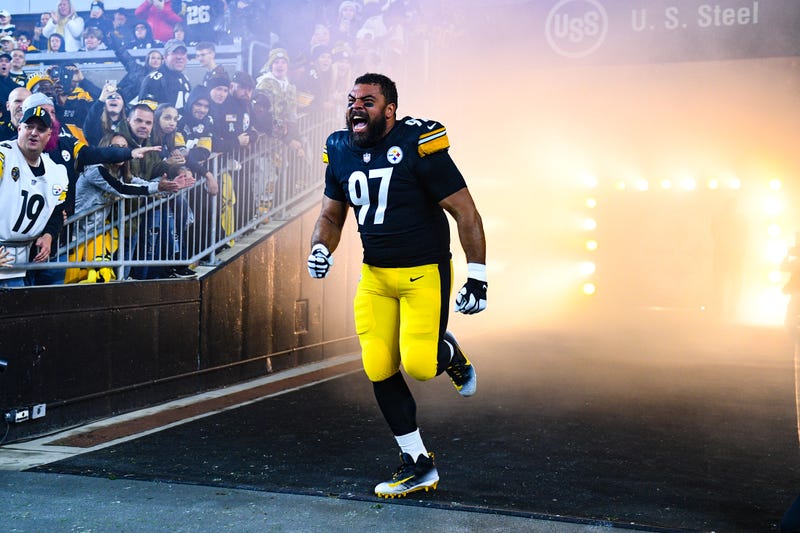 Pittsburgh Steelers edge rusher T.J. Watt demonstrated why he's the league's highest-paid defensive player on Sunday, as his strip-sack of Geno Smith late in overtime set up a game-winning, 36-yard field goal by Chris Boswell and clinched a 23-20 win over the Seattle Seahawks at Heinz Field.

Watt wasn't Pittsburgh's only difference-maker in the trenches. Cam Heyward recorded a team-high nine tackles, and recorded his 60th career sack during the second quarter. And Steelers team reporter Missi Matthews believes that the 32-year-old veteran, not Watt, is the backbone of their defense.

"I can't give Cam Heyward enough kudos. This is the guy who does the grunt work, bats down the passes, gets in the face of offensive lineman," Matthews told After Hours with Amy Lawrence on Monday. "T.J. Watt is the flashy guy on defense, but Cam is the veteran leader. He's like a mini Coach Tomlin, in terms of the mindset, getting guys to gel, and just not rocking the boat. Whether it's good or bad, he's very focused and he rallies the guys..."

Heyward's lone sack was historic. Not only did he move into fifth place on the franchise's all-time sacks list, but he also surpassed Keith Willis (59.0) for the most sacks by a Steelers defensive lineman since 1982, the first year sacks became an official stat. Through Pittsburgh's six games, Heyward ranks third in combined tackles (46), fifth in solo tackles (20), second in tackles for a loss (5), and second in total sacks (2.0).

Watt also made some history against the Seahawks, becoming the NFL's first player to have two or more sacks and a forced fumble in overtime since 1982, according to Stats By STATS. The two-time All-Pro and three-time Pro Bowler now ranks second in the NFL in sacks (7.0) and fifth in tackles for a loss (7).

Pittsburgh, which enters its bye at 3-3, will visit the rival Cleveland Browns in a Week 8 matchup on Oct. 31. According to FiveThirtyEight, the Steelers have a 23-percent chance to reach the playoffs and just a 3-percent chance to win the AFC North.

The entire Steelers conversation between Matthews and Lawrence can be accessed in the audio player above.