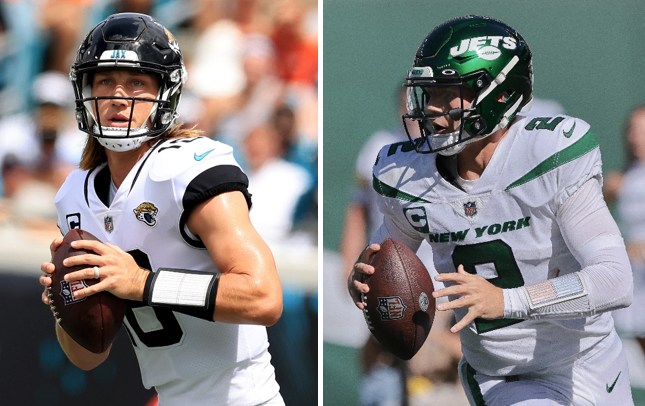 The top two picks in this year's NFL Draft aren't off to hot starts. In four games combined, rookie quarterbacks Trevor Lawrence and Zach Wilson are winless, with a 56.6 passer rating and touchdown-to-interception ratio of 6-to-10.

Of course, it's far too early to properly judge their NFL futures -- the regular season is only two weeks old. But CBS Sports HQ analyst Bryant McFadden doesn't believe that the Jacksonville Jaguars and New York Jets are making life easy for Lawrence and Wilson.

"My level of concern is pretty high right now for both players, because they don't have a lot surrounding them that can help them out," McFadden told the Reiter Than You show on Tuesday. "Zach Wilson, offensive line woes because of all the injuries. So, if you don't have key guys on the offensive line, you really can't run the football. That makes your offense one-dimensional and puts more pressure on you as a passer.

"With Jacksonville, they can't run the ball as well, and it puts more pressure on Trevor Lawrence... When you look at both young players, they're asked to do so much without big-time contributors to help them... Those two players have a lot of pressure on their plate right now. So, my concerns are extremely high because you don't want to stunt their growth..."

Lawrence struggled mightily to generate offense on Sunday, completing just 14 of 33 passes for 118 yards with two interceptions in Jacksonville's 23-13 home loss to the Denver Broncos. But the Clemson product did orchestrate a successful opening drive, as he connected with wide receiver Marvin Jones on a sharp 25-yard touchdown pass.

Lawrence and Wilson will meet for the first time in Week 16, when the Jaguars visit the Jets on Dec. 26. According to the William Hill Sportsbook, Lawrence currently has the third-best odds (+650) to win Offensive Rookie of the Year, while Wilson has the eighth-best odds (+1800).