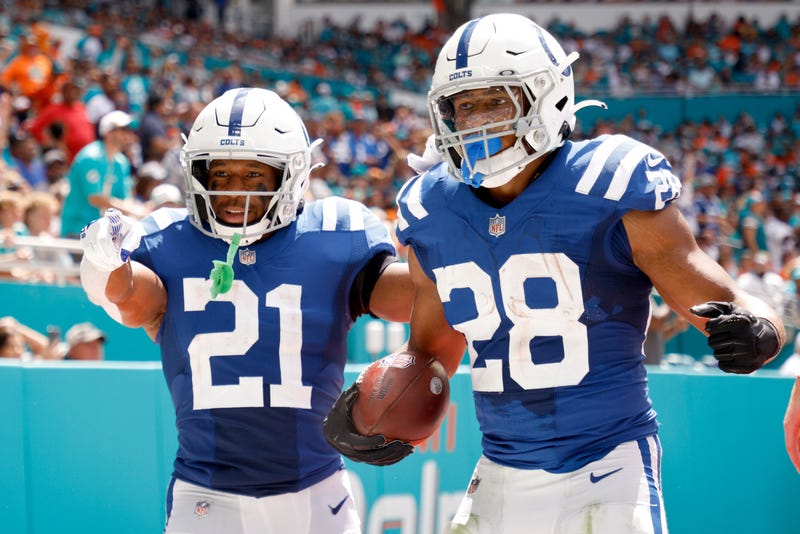 Since 2012, only one running back has won the prestigious NFL MVP award. But the long-established streak of quarterbacks bringing home the hardware could possibly be snapped this season, based on Jonathan Taylor's numbers.

Through 12 games this season, the Indianapolis Colts' second-year halfback has resembled a superstar. Carrying the baton for Derrick Henry, the reigning rushing leader who underwent foot surgery one month ago, Taylor leads the league in rushing yards (1,205), scrimmage yards (1,541), rushing scores (14), and carries of 20-plus yards (10). Sheer dominance.

"We're both explosive, we can make big plays at any time. I think I said that to everybody [last year], he's going to make that next step," Colts running back Nyheim Hines told the Tiki and Tierney show on Tuesday. "The game's slowing down for him. And then after that, it's just like football -- the game he's always loved when he's not worried about calls and all that. Now he's out there being himself. When he can go out there, be himself, it looks like him at Wisconsin.

"He's been remarkable, it's been great watching him turn into the player he is. He has a lot more to keep going. He's one of the hardest-working guys I've ever seen. So, he'll keep getting better, I know that for sure... We're all hoping for the best for each other... When JT's out there, it's like, 'Dang.' We all have such different, unique skillsets, that we all help each other..."

In the Colts' 38-31 home loss to the Tampa Bay Buccaneers this past Sunday, Taylor nearly made history. He fell an agonizing three yards shy of surpassing LaDainian Tomlinson's record of eight consecutive games with 100 total yards and one touchdown, set during his MVP season in 2006. Taylor finished the game with 83 yards on the ground and 14 through the air, with one score.

Although Taylor's performance against Tampa wasn't memorable, he stole the show two weeks ago. In the Colts' beatdown of the Buffalo Bills on Nov. 21, the former first-round pick rushed for a season-high 185 yards on 32 carries with a franchise-record five touchdowns.

Indianapolis (6-6), which sits in second place in the AFC South standings, will visit the Houston Texans (2-9) in a Week 13 matchup on Sunday. According to FiveThirtyEight's projections, the Colts currently have a 53-percent chance to reach the playoffs, but just a 4-percent chance to win the division.

The entire Colts conversation between Hines and Tiki and Tierney can be accessed in the audio player above.