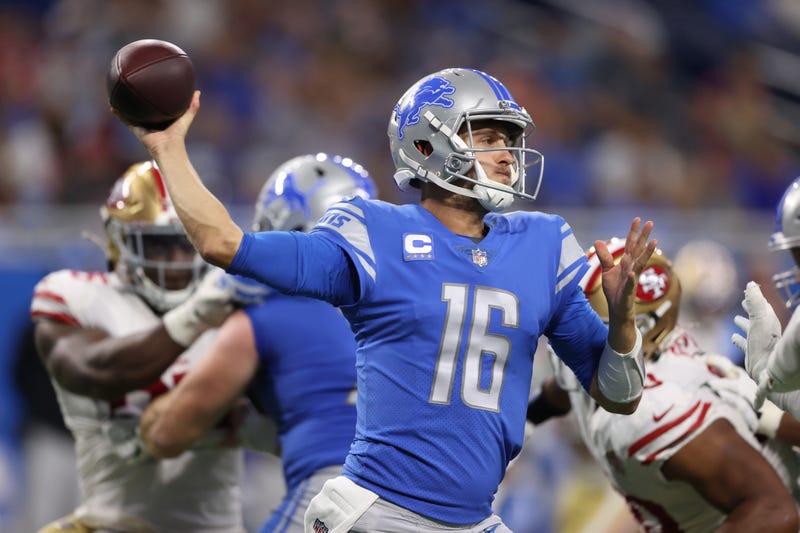 The Detroit Lions are counting on new starting quarterback Jared Goff to help guide the team through a murky rebuilding process. And he showed some grit during his franchise debut Sunday, completing 38 of 57 passes for 338 yards with three touchdowns in a whacky 41-33 loss to the San Francisco 49ers.

Following the game, Lions running back D'Andre Swift told reporters that he admired Goff's confidence, calling him a "natural born leader." But will Goff, now in his sixth season, be able to raise his performance whenever Detroit faces adversity? Former NFL linebacker Brady Poppinga is optimistic.

"Goff looks really good. And I give a lot of credit to that team," Poppinga told the Reiter Than You show on Wednesday. "Because it's really easy -- if you've been in this losing culture like the Lions have and then all of the sudden are being destroyed -- for guys to shut it down. I've experienced it... Goff was a real big surprise to me. I don't know why, but he seems a little more edgy.

"Maybe because he's out to prove something. Maybe he's got a chip on his shoulder -- the Rams just gave up on him and he's out to prove everybody, 'Hey, you shouldn't have done that.' You add all that up, I think they're going to be the most dangerous team, second to the Packers, in the NFC North."

The final score wasn't indicative of the game as a whole. Late in the second quarter, the 49ers were cruising, as a costly pick-six thrown by Goff pushed Detroit's halftime deficit to 18 points. But the former first-round pick rallied the offense late in the fourth. Trailing 41-17, he led the Lions on touchdown drives of 86 and 59 yards, completing 19 of 25 passes in the process.

Goff certainly has a chip on his shoulder. In the past two seasons, he ranked second in the NFL with 38 turnovers, and despite the Rams' appearance in the NFC playoffs in 2020, Goff's offense ranked 22nd in the league in average points, 23rd in total points, and 25th in percentage of drives ending with an offensive score.

Detroit (0-1) will visit the Green Bay Packers (0-1) in a Week 2 matchup next Monday, Sept. 20. According to FiveThirtyEight's projections, the Lions have just a 7-percent chance to reach the playoffs, and a 6-percent chance to win the NFC North.